More Than 400,000 Children in India Die of Pneumonia, Diarrhea Every Year 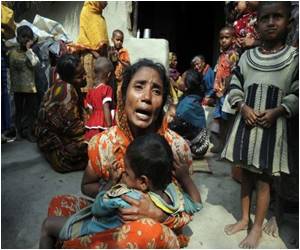 More than 400,000 children die every year in India before their fifth birthday due to two easily preventable diseases - pneumonia and diarrhea, says a new report released Tuesday.

Many Indian children do not have access to life saving treatment and preventive measures, says the Pneumonia and Diarrhea Progress Report 2013 published by the International Vaccine Access Center (IVAC) at Johns Hopkins Bloomberg School of Public Health in Baltimore, US.

The report said India continues to have the largest number of pneumonia and diarrhea cases in the world.


The country continues to lose more than 400,000 children before their fifth birthday due to these two easily preventable diseases. Many more children suffer from severe illness.
Advertisement
While India has made some progress in coverage of pneumonia interventions and is poised to protect more children from pneumonia and diarrhea with the upcoming national scale up of pentavalent vaccine, its coverage levels for both pneumonia and diarrhea remain below targeted levels, the report said.

Pneumonia and diarrhea continue to be the leading killers of children under the age of five worldwide.

According to the latest estimates by Unicef, pneumonia and diarrhea together claimed the lives of more than 1.7 million children under five in 2012 alone.

"India has taken a few steps in addressing the pneumonia disease burden by introducing the Haemophilus influenzae type B (Hib) vaccine in nine states. The National Technical Advisory Group on Immunization (NTAGI) has now recommended the vaccine for a national scale up," N.K. Ganguly of the National Institute of Immunology said.

However, India still needs to include other vaccines such as rotavirus and pneumococcal in its national program while simultaneously strengthening its health systems and improving access to other preventive interventions and treatment solutions, he said.

Pneumonia
Pneumonia is a lung infection that can be caused by a bacteria or a virus. It causes inflammation of...