Microbial Infections Linked to Drug Use 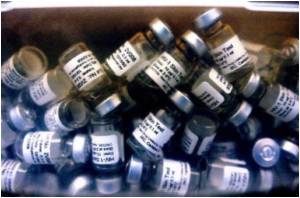 Physicians writing in the Journal of Medical Microbiology say that illicit drug users are at increased risk of being exposed to microbial pathogens and are more susceptible to serious infections.

The review, which aims to improve the microbiological diagnosis of drug use-related infections, assesses the role of drug related practices in the spread of a range of bacterial, viral, fungal and protozoal infections.

The review by collaborators from the Armed Forces Medical College, Pune, India highlights convincing evidence that unsterile injection practices, contaminated needles, syringes and the use of cutting agents all represent avenues by which micro-organisms can enter the body. Outbreaks of tetanus, Group A Streptococcal disease and, more recently, anthrax have all been documented in illicit drug users.


Drug abuse not only enhances exposure to pathogens but can also increase the risk of infection by facilitating the local growth of micro-organisms and suppressing the user's overall immunity. Dr Karishma Kaushik one of the authors, says, "Drugs such as cannabis and opiates have been shown to directly suppress immune function. Methadone has also been shown to enhance HIV replication in immune cells. What's more, dead or damaged tissue at an injection site provides an ideal anaerobic environment for certain pathogens to grow. The bacterial species Clostridia, for example, thrive in anaerobic environments and can lead to wound botulism, tetanus and necrotizing fasciitis - commonly known as the flesh-eating disease."

Leucopenia / Leukopenia is a decrease in the number of total white blood cells found in blood. The normal total white cell count is 5000-10000 per cubic millimeter.
Advertisement
The association between drug use and the transmission of certain viral pathogens is well established. Illicit drug users represent the major risk group for acquiring hepatitis C infection and also bear a substantial burden of HIV infection globally. "Drug abuse accounts for at least 10% of HIV infections globally and this may rise to 40% in the near future," explains Dr Kaushik. "Drug use also contributes to the spread of HIV in non-drug user populations such as from injecting husbands to their non-injecting wives. Associated lifestyle practices such as multiple sexual partners are also co-factors in increasing the risk of infection," she says.

Dr Kaushik believes that an increased awareness of the microbial complications associated with drug use will allow better diagnosis and management of infections in this group. "Infections are one of the most serious complications of drug abuse. They are frequently encountered in the hospital setting and constitute a major burden to the health care system. Yet drug users are a relatively poorly studied cohort of patients seeking clinical care."

Hearing Loss Calculator The Essence of Yoga Color Blindness Calculator Selfie Addiction Calculator A-Z Drug Brands in India Drug - Food Interactions Noscaphene (Noscapine) Find a Doctor Nutam (400mg) (Piracetam) Blood - Sugar Chart
This site uses cookies to deliver our services.By using our site, you acknowledge that you have read and understand our Cookie Policy, Privacy Policy, and our Terms of Use  Ok, Got it. Close
×