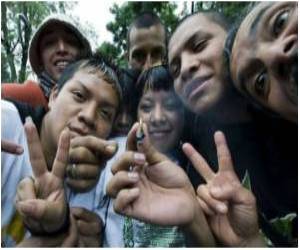 With a child's unfettered frankness, six-year old Jorge tells a social worker that he is saving his pesos for the one thing he wants more than anything: an AK-47 automatic rifle.

It will take a weapon at least that deadly, the boy reckons, to visit retribution on the assassins who brutally shot and killed his father.

Acapulco, once a magnet for Hollywood stars on Mexico's Pacific coast, is now fighting a reputation for gruesome killings, including 15 decapitated bodies discovered this month.
Advertisement

Jorge is one of 12,000 children orphaned in Mexico's relentless and bloody drug wars. As tragic as his situation, he is one of the few lucky children to receive mental health counseling after losing a parent to the ruthless drug trade that has proliferated across the country -- especially along the US-Mexico border.


Drug lords embroiled in deadly turf battles have caused a bloodbath across Mexico, with over 34,600 people killed since December 2006. The country's Human Rights Commission said another 5,000 people are missing and presumed dead, and a military crackdown has failed to stem the violence.

Drug War of Mexico Spilling Into US

Homes are being invaded by gunmen, people raped and tortured, and bodies dumped in the Arizona desert as violence from the Mexican drug wars spills into the American Southwest.
Advertisement
Most of the roughly 7,000 people mowed down in Ciudad Juarez have been between the ages of 17 and 35, and social workers and grief counselors here said many were the parents of small children.

"At least 12,000 children have lost one or both of their parents," said Gustavo de la Rosa, an official from Mexico's human rights commission.

Those motherless and fatherless children, said de la Rosa, are a lasting and tragic legacy of Mexico's drug wars. After witnessing the execution of a parent, the children -- even if physically uninjured themselves -- face a lifetime of emotional scarring.

But here in Juarez there are just 20 psychologists to serve the survivors, whose numbers grow every day.

"We have an urgent need for psychologists" to treat the children of those who have been killed, said De la Rosa, adding that authorities have put out a call to those with experience working with victims of war and violence in places like the Balkans and in Africa.

A shortage of mental health workers means others have had to step in to fill the gaps, including academics, clergy members, and social workers.

Jorge's mother sought help for her son after he told her about his goal of saving enough money for an automatic weapon to avenge his father's death.

"These kinds of stories are not unusual," said Silvia Aguirre founder of the Family Center for Integration and Growth, whose six staff therapists have been taxed to the breaking point by the violence.

Aguirre knows of another child whose piggybank savings are being collected "so that he can buy a bomb one day and blow up the television station" that callously broadcast images of the severed head of his slain father.

Survivors raising children affected by the drug wars can attend workshops geared for teens and adults, but the need is far greater than the available resources.

Children lucky enough to get counseling sometimes receive play therapy to help them cope with the feelings of loneliness and rage that can arise after parents have died a violent death.

Others however have the ongoing emotional challenge caused by being stigmatized as children of "narcos" as drug dealers are sometimes called.

Myrna Pastrana, a local writer who was born in Ciudad Juarez, has compiled about 100 stories of small children whose lives have been shattered by Mexico's drug wars.

"One child recounted how some men came to his home, took him outside, and shot his parents and his three older siblings all in a row," Pastrana said, adding that the tot can vividly recall the puddles of blood as his family members lay dead in the road.

Hard as it is to imagine now, Pastrana said she can remember a time when Ciudad Juarez was a wonderful place to grow up.

Now, city life in Juarez has itself become a casualty of Mexico's deadly drug trade, particularly after nightfall in the once vibrant downtown, with its abandoned and burned out businesses.

The government of Chihuahua, the state where Ciudad Juarez is situated, has disbursed 100 million pesos, (800,000 dollars) for the mental health care of the survivors -- a sum most social workers say is woefully inadequate.

"Where is the international aid? Where is UNICEF?" asked Pastrana, referring to the UN agency tasked with promoting the health and welfare of children.

"Thousands of children are not getting any help at all," the writer said, with an ominous warning.

"There is no doubt that when they grow up, they will be bitter adults who continue the cycle of killing."