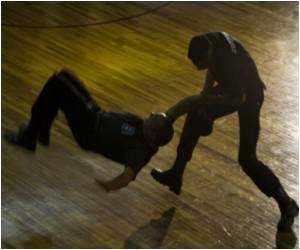 Acapulco, once a magnet for Hollywood stars on Mexico's Pacific coast, is now fighting a reputation for gruesome killings, including 15 decapitated bodies discovered this month.

Acapulco is in Guerrero, one of the states most hard-hit by Mexico's roiling drug violence, and there have also been been complaints of partisan violence in the run-up to elections for a new state governor on Sunday.

Tijuana on Monday launched a campaign to attract visitors from the neighboring US city of San Diego, despite spiralling drug violence in the Mexican border town that last year claimed 843 lives.
Advertisement

The rising violence has tainted the port city's fun-loving reputation among visitors both in Mexico and abroad, to the concern of tour operators.


"We have to thank the tourists who keep coming, but we have to increase promotions and security more creatively, because otherwise tourists will look for other destinations," said Laura Caballero, president of a local business leaders association.

Fear and Fun in Mexico's Beach Resort for Spring Break

A topless college student shook her hips in a Mexico beachside hotel pool to the delight of a screaming crowd as an armed guard watched from a distance, wiping sweat beads off his face.
Advertisement
Although many foreign tourists these days prefer other Mexican resorts, mainly on the Caribbean, Acapulco remains a top destination for Mexicans, particularly for weekend trips from the capital.

Tourism is the main source of income for Guerrero, where there have already been more than 70 brutal killings reported this year.

Industry professionals worry that the gruesome reports and cars full of soldiers now regularly patrolling the city's famous bay will scare off tourists.

"We need concrete actions to overcome the violence and image of insecurity," said Carlos Hernandez, president of the state tourism employers' council.

Several powerful drug gangs are believed to be fighting for control of the key port of entry for drugs heading to the United States, including the Beltran Leyva gang, La Familia and Los Zetas.

The year began with the discovery of 15 decapitated bodies in front of a shopping center. The same day, January 8, police found the bodies of six men inside a vehicle after they had been forced out of a popular nightclub.

In September, 20 men visiting from the neighboring state of Michoacan were abducted and all but two were found dead, according to public security officials.

The Michoacan government and family members said the men were mistaken for cartel rivals.

Executions, shootouts between rival gangs and battles with security forces have left more than 34,600 people dead in Mexico in the four years since President Felipe Calderon launched an offensive against the cartels.

Despite the violence, hotel occupancy in Acapulco still reached 90 percent in the December high season, according to local tourism authorities.

This week at least 4,100 tourists arrived at the port on three cruise ships, including the Queen Elizabeth, according to the port's captain.

"Of course we have problems of violence, but other countries and tourist destinations do too, and the flow of visitors doesn't stop," said Jose Luis Avila, mayor of the city of some 700,000 residents, pointing to recent shootouts in the slums of Rio de Janeiro, Brazil.

A new campaign draws on Acapulco's past ties with Hollywood stars of the 1950s and 1960s, including Elizabeth Taylor and Elvis Presley.

But the election campaign has not helped efforts to clean up the city's image, with each of the two main candidates accusing the other of receiving support from drug traffickers.

"The appeal to confrontation by both campaigns adds to what Acapulco is experiencing from drug trafficking, with endless killings and the fear that there will be less tourists," said Eduardo Gutierrez, a sociologist at the University of Guerrero.

Cocaine Use Doubles in Mexico in Six Years

Cocaine use doubled in Mexico in the six years to 2008, the health minister said Friday, arguing that tougher border controls on smuggling has pushed more of the drug into the domestic market.
Advertisement
<< Men Forgive Girlfriends' Homosexual Relationship, But Women...
Music Predicts Sexual Attraction >>