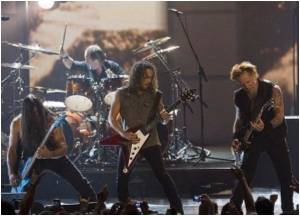 Have you ever wondered why your relationship ended in a wrong note? Well, the reason would be your taste in music. In a recent study it has been highlighted that music actually predicts sexual attraction.

The most recent issue of Psychology of Music exmaines the link between identity, music and what makes people 'click'.

Why Music Gives You Goosebumps

Scientists have now unraveled the theory behind why people get goosebumps while listening to music.

This had led the LA Weekly blog to explore what it is about why we like, what we like, and perhaps more importantly, how this can make or break a relationship.


During adolescence, music becomes a symbol of your identity to help you belong.

Research duo North and Hargraves say that music functions as a 'badge' which people use to not only judge others but at the same time, to express their own ideas.

After being ordered to avoid physical contact with pupils over fears of accusations of paedophilia, music teachers in Britain have expressed their fury

For instance, the child who wants to appear rebellious picks music that seems like it's made by people who rebel.

This symbol of identity also helps you strike a balance between belonging but also being original.

You do this by liking a genre that your friends like, but to try and stand out while not becoming a total outcast, you find a performer within that genre which no-one else knows about.

Eventually however, you get into music that reflects your values.

According to researchers, rock is associated with social awareness and rebelliousness while pop is linked to values about gender roles and conformity.

Scholars Rentfrow and Gosling discovered that people who like blues, jazz, classical, and folk are liberal and more open to experiences.

The blog also points to a study, which found that a woman's devotion to country music diminishes her attractiveness to a potential male mate and a man's interest in country music make him less attractive to women.

But devotion to classical music and heavy metal rock has a different effect depending on if you're a man or a woman.

"A date's devotion to country music was found to diminish attraction in respondents of both genders. In contrast, devotion to classical music and to heavy metal rock proved to be gender specific," the Daily Mail quoted the study as saying.

"Fascination with heavy metal rock greatly enhanced the appeal of men, but it proved detrimental to that of women. Adoration of classical music produced the reverse consequences.

"It tended to facilitate the appeal of women, but to diminish that of men.

It also found that men were more strongly attracted to women with whom they shared musical tastes," the study added.

The study has been published in the Communication Research journal.

The discovery of a gene, possibly crucial to pain relief, opens up new vistas of treatment, enabling us to experience pain as music.

Pheromones are the wonder chemicals that are known to significantly influence the love chemistry and sexual ...

What is the idea behind music as a healing therapy? The position of Indian classical music in this genre of ...