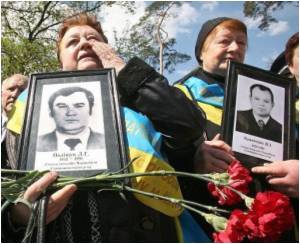 Every year, Volodymyr Palkin spends at least two months in a Kiev hospital. He was one of hundreds of thousands of rescue workers sent to fight the disaster at the Chernobyl nuclear plant and says his health has been permanently ruined by his work.

Yet 25 years after the world's worst nuclear disaster on April 26, 1986, huge controversy remains over the true extent of the damage caused to health, with estimates ranging from tens of thousands of fatal cancers to far fewer.

Biofuels May Help to Grow Food Again in Chernobyl 'Badlands'

Belarus, a country affected much by the fallout of the Chernobyl nuclear disaster of 1986, is planning to grow biofuels to make its soil fit to grow food again...
Advertisement

An estimated 600,000 rescue workers, known as liquidators, from across Belarus, Russia and Ukraine were sent to Chernobyl in the years after the disaster, working in hazardous conditions to clean up the contaminated wreckage.


Palkin, now 69, was one of the first wave of emergency staff. Sitting on his hospital bed he showed pictures of his former colleagues who were among the 30 people confirmed to have died in the first weeks after the disaster.

Risk of Thyroid Disease High Among Those Exposed to Chernobyl Accident

Researchers have found that people exposed to radioactive from the Chernobyl accident as kids and adolescents have an increased risk of follicular adenoma or benign tumour of the thyroid gland.
Advertisement
He was ordered to work on April 26 and was then hospitalised a few weeks later with haemorrhages in his throat and intestines. He says he was ordered by the authorities to register only half of the radiation exposure he received.

"I had excellent health before. But now I can hardly walk, I suffer problems with my thyroid and my teeth are disintegrating," said Palkin, who has spent two months each year in hospital since 1986.

He complained of the size of his pension -- $202, most of which he said goes on medicine. As a certified "liquidator" he also receives a monthly payment of 300 hryvnias ($38) for food and a 50 percent discount on household bills.

Palkin shares his hospital room with Volodymyr Zabolotny, 70, a fellow veteran of Chernobyl, who however puts his health problems down to old age rather than his work in the disaster zone.

Organisations including environmental campaigning group Greenpeace have warned there could be as many as 100,000 fatal cancers that can be directly attributed to Chernobyl, many affecting the liquidators.

But such conclusions are vehemently contested by the UN Scientific Committee on Atomic Radiation (UNSCEAR), whose latest report in February estimated the death toll from Chernobyl to be in the dozens and not the thousands.

Along with the two Chernobyl workers who were killed by the explosion and the 28 other staff and firemen who died from radiation shortly afterwards, it says just 19 of the radiation survivors died up to 2006, for various reasons not usually associated with radiation exposure.

The only major health effect for the wider population was 6,000 cases of thyroid cancer that were due to children drinking contaminated milk at the time, of which 15 had proved fatal by 2005. Thyroid cancer is considered to be treatable.

As for the liquidators, "to date apart from an increase in the incidence of leukaemia and cataracts among those who receives higher doses, there is no evidence of health effects that can be attributed to radiation exposure," UNSCEAR said.

Such conclusions are politically explosive in Ukraine where liquidator groups have long blamed their illnesses on Chernobyl and have bitterly criticised the post-Soviet authorities for insufficient compensation.

Some experts have said that possibly the worst health legacy of Chernobyl is a mental rather than physical one, with those affected traumatised by the memory of April 1986, forced relocation and above all the sense that they are victims of a nuclear catastrophe.

One voice which has dissented loudly from the line of the UN agencies is Belarussian nuclear expert Yury Bandazhevsky, who was jailed for several years from 2001 on corruption charges supporters say were trumped up as punishment for his criticism of Minsk's handling of the nuclear contamination.

"A proper system for estimating the consequences has yet to be developed at an international level," Bandazhevsky, who has been researching the effects of the disaster since 1987, told AFP.

"State structures have for the last 25 years done everything to cover up the information for the sake of the nuclear energy lobby which is the most powerful lobby in the world and dictates the conditions today."

But Ukrainian medical researcher David Belyi, who has co-authored several international papers on Chernobyl, backed the scepticism over the large toll from Chernobyl, even though he admitted there could still be gaps in our knowledge.

"It's very hard to estimate the effects of the radiation," he told AFP.

"Today all the attempts to connect the radiation with illnesses of the internal organs amongst the affected population -- with the exception of thyroid cancer -- have not resulted in success."

"We cannot say that gastric ulcers or heart disease are encountered more often or in a particular form among the liquidators."

He strongly denied witnessing any pressure from the government or big nuclear energy business to suppress any statistics.

Life expectancy for those affected by Chernobyl is no different from the World Health Organisation's life expectancy estimate for men and women in Ukraine of 61 and 73 years respectively, he said.

"So far we have not shown other effects. But in the future we should not be afraid of re-examining our knowledge and acknowledging any mistakes," he said.

Twenty-one years after the Chernobyl nuclear disaster in Ukraine, fish and mushrooms in parts of Finland are still toxic due to radioactive fallout, Finnish authorities said on Monday.
Advertisement
Advertisement