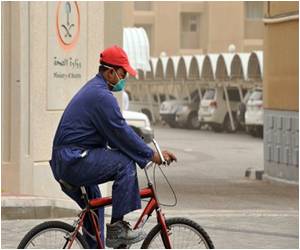 In the United Arab Emirates, two new cases of the potentially deadly MERS respiratory virus have been reported.

A 38-year-old Jordanian resident was hospitalised with breathing problems and diagnosed to be a carrier of MERS, the Middle East Respiratory Syndrome Coronavirus.

A new MERS death was confirmed by Saudi health authorities on Wednesday.
Advertisement

His wife, who is eight months pregnant, was also hospitalised after being diagnosed as suffering from the disease, health authorities in Abu Dhabi said.


In July, the authorities reported that there had been seven MERS cases in the oil-rich Gulf federation in which foreign residents comprise 80 percent of the population.

A camel has tested positive for MERS, recording the first case of animal infected with the coronavirus that has killed 64 people worldwide, says the Saudi government.
Advertisement
The World Health Organisation says it has been informed of 160 laboratory-confirmed cases of infection worldwide since September last year, including 68 deaths.

Saudi Arabia is the worst affected country, accounting for 55 deaths out of 130 confirmed cases.

Experts are struggling to understand the MERS virus, for which there is no vaccine.

Like SARS, MERS appears to cause a lung infection, with patients suffering from a temperature, cough and breathing difficulties.

The number of deaths from the coronavirus in Qatar has now climbed to three following the death of an expatriate living in the Gulf state who had earlier contracted MERS.
Advertisement
<< Key Protein Responsible for Controlling Communication Betwe...
Massive Online Archive of AIDS Posters >>