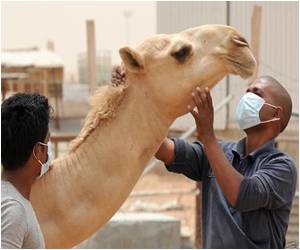 Genetic fragments of the MERS coronavirus have been detected in the air of a barn that holds a camel infected with the virus in Saudi Arabia. The work, published this week in mBio®, the online open-access journal of the American Society for Microbiology, indicates that further studies are needed to see if the disease can be transmitted through the air.

MERS, a serious viral respiratory illness caused by the coronavirus, has been identified in 699 people as of June 11, according to the World Health Organization; 209 people have died from the condition. An additional 113 cases occurring between 2012 and 2014 were reported by the Saudi Arabian Ministry of Health on June 3.

Australian Government officials plan to wipe out 650,000 camels in the remote Outback area of the country.
Advertisement

For the study, researchers on three consecutive days last November collected three air samples from a camel barn owned by a 43-year-old male MERS patient who lived south of the town of Jeddah, who later died from the condition. Four of the man's nine camels had shown signs of nasal discharge the week before the patient became ill; he had applied a topical medicine in the nose of one of the ill camels seven days before experiencing symptoms.


Using a laboratory technique called reverse transcription polymerase chain reaction (RT-PCR) to detect gene expression, they found that the first air sample, collected on November 7, contained genetic fragments of MERS-CoV. This was the same day that one of the patient's camels tested positive for the disease. The other samples did not test positive for MERS-CoV, suggesting short or intermittent shedding of the virus into the air surrounding the camels, said lead study author Esam Azhar, PhD, head of the Special Infectious Agents Unit at King Fahd Medical Research Center and associate professor of medical virology at King Abdulaziz University in Jeddah.

Save The World, Eat A Camel: Scientists Urge Oz Consumers

Scientists have urged Australian consumers to eat more camel meat because the country's one million-plus population of the animals is out of control, and is also wreaking environmental havoc.
Advertisement
Additional experiments confirmed the presence of MERS-CoV-specific genetic sequences in the first air sample and found that these fragments were exactly identical to fragments detected in the camel and its sick owner.

"The clear message here is that detection of airborne MERS-CoV molecules, which were 100% identical with the viral genomic sequence detected from a camel actively shedding the virus in the same barn on the same day, warrants further investigations and measures to prevent possible airborne transmission of this deadly virus," Azhar said.

"This study also underscores the importance of obtaining a detailed clinical history with particular emphasis on any animal exposure for any MERS-CoV case, especially because recent reports suggest higher risk of MERS-CoV infections among people working with camels," he added.

Meanwhile, he said, mounting evidence for camel-to-human transmission of MERS-CoV warrants taking precautionary measures: People who care for camels or who work for slaughterhouses should wear face masks, gloves and protective clothing, and wash their hands frequently. It is also important to avoid contact with animals that are sick or have tested positive for MERS-CoV. Those who visit camel barns, farms or markets should wash hands before and after contact with animals. In addition, pasteurization of camel milk and proper cooking of camel meat are strongly recommended.

Omicron Variant of COVID-19
News Archive
News Resource
Advertisement
News Category
Could Social Rejection Drive People to Take COVID-19 Safety Precautions? New Test to Predict COVID-19 Immunity Can a COVID-19 Test Kit Work for Monkeypox Too? How COVID-19 Affected Friendships in Adults? Why COVID-19 Symptoms Rebound in People Who do not Take Paxlovid?
More News
Sign up for Wellness Consult a Doctor Sign up for Selfcare

Drug Side Effects Calculator Drug - Food Interactions Selfie Addiction Calculator Vent Forte (Theophylline) The Essence of Yoga How to Reduce School Bag Weight - Simple Tips Iron Intake Calculator Noscaphene (Noscapine) Blood - Sugar Chart Daily Calorie Requirements
This site uses cookies to deliver our services. By using our site, you acknowledge that you have read and understand our Cookie Policy, Privacy Policy, and our Terms of Use