Actor Matt Damon suffered a sprained his neck while feeding and holding his daughter as she slept earlier this week.

The 'The Bourne Ultimatum' actor, who recently credited his daughter for the improvement in his acting skills, facetiously said that fatherhood had become a difficulty for him.

"My 14-month old daughter Isabella did me in -- something no killer can," Us magazine quoted him as telling German newspaper Bild.Damon attended the Berlin premiere of The Bourne Ultimatum on Tuesday night, and signed numerous autographs for fans who had waited to see him.


He, however, did not show up at the party afterwards, because of the pain from his pinched nerve.He took the services of an acupuncturist to get rid of his pain, but all that the therapy could grant him was only a little relief attend the premiere of his film.

When Damon left Berlin on Wednesday afternoon, he was reportedly a wearing neck brace.

Sprain - First Aid and Emergency Treatment Guide
A quick and simple First Aid guide on how to administer treatment for Sprain.
READ MORE 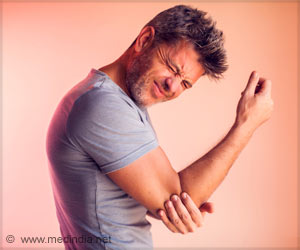 Sprained Arm
A sprain is a condition that occurs due to excessive stretching, twisting or tearing of a ligament due to heavy force on the joint.
READ MORE