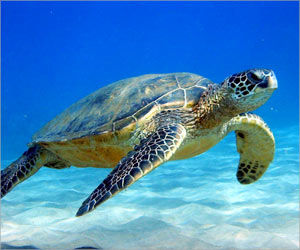 Lead researcher Brendan Godley from University of Exeter in England said, "When turtles ingest plastic, they can suffer intestinal blockage that can result in malnutrition which can in turn lead to poor health, reduced growth rates, lower reproductive output and even death. It is sobering to think that almost every piece of plastic that ever entered the sea is still there; breaking down and forming a vast soup of microplastics that could have frightening long-term repercussions."

Five additives and three biodegradation methods prove that biodegradable plastics do not break down any faster than their conventional counterparts.
Advertisement

Joint lead study author Sarah Nelms, from University of Exeter's Penryn campus said, "I was shocked at how little is known about the impacts of plastic on marine turtles. We know that discarded plastic poses a serious threat to wildlife, but this study shows that more research is urgently needed if we are to understand the scale of the problem."


The study suggested that urgent action is required to better understand this issue and its effects on marine turtles, so that appropriate and effective mitigation policies can be developed. The research team has called for further work to investigate the sub-lethal effects of plastic ingestion and the associated contamination from chemicals relating to the plastic particles.

The research was published in the Journal of Marine Science.

Use of Plastics may cause Miscarriages

New researches show that chemicals found in many household plastics, pesticide formulations, soft vinyl products and synthetic fragrances may increase the risk of a miscarriage.
Advertisement

Carrying pet bottles has been banned on all major beaches and the five wildlife sanctuaries in Goa to turn the state into a plastic-free zone.
Advertisement
This site uses cookies to deliver our services.By using our site, you acknowledge that you have read and understand our Cookie Policy, Privacy Policy, and our Terms of Use  Ok, Got it. Close
×