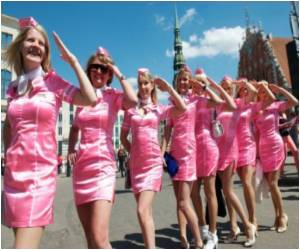 Decked out in pink, their locks glinting in the sunshine, hundreds of blondes marched arm-in-arm through the Latvian capital Riga Saturday, in a bid to raise spirits in the slump-stricken Baltic state.

Tourists and locals marvelled as more than 800 blondes wove their way through the streets for the second edition of what organisers say they hope will become a regular annual event.

A new study has revealed that blonde women earn seven percent more on average than women with other hair colors.
Advertisement

"I feel very good to be surrounded by so many beautiful women. It's great to be blonde," local student Linda told AFP.


For the 19-year-old, who turned out with her dog Sniffs, the event is mostly a fun day out with friends.

"It is just great to do something positive in Latvia and at the same time promote blondes as being fun, positive, intelligent people," said Ilze, a blonde helping out at the parade.

Here It Is: Blondes are Paid Less

A new study has found that blondes might be popular among the boys, but when it comes to earnings, they don't really laugh all the way to the bank.
Advertisement
Started last year by a group of like-minded local blondes, the march aims to bring some cheer to Latvians who have had little cause to smile recently.

The Baltic nation of 2.2 million people is locked in the deepest economic crisis of the 27-nation European Union, after a boom went off the rails and sent its economy shrinking by 18 percent in 2009.

Money collected during the event will be donated to local charities, including for mothers with disabled children.

Organisers said they were extremely happy with the turnout, up from last year's 500, with the parade wrapping up a week of events celebrating all things blonde, including a Marilyn Monroe lookalike competition.

This year's parade also drew foreign crowds, including New Zealanders Rachel and Clint, who travelled from Britain especially after seeing the 2009 edition in the media.

Grinning widely, 26-year-old Clint told AFP: "After seeing last year?s parade in the news, I knew this was something I could not afford to miss!"

Heres a Shocker: Blondes are More Determined Than Brunettes

Blondes have often being depicted as dim witted but a new study has shown that people with blonde hair are more aggressive and determined compared to redheads or brunettes.
Advertisement
<< NGO Opens First 'Baby Hatch' for Abandoned Babies in Malays...
Economic Stress Destroying British Families >>