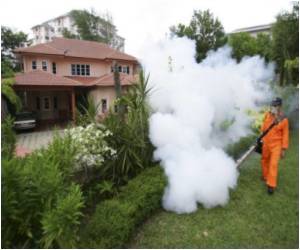 Malaysia is considering releasing genetically modified mosquitoes designed to combat dengue fever, in a landmark field trial that has come in for criticism from environmentalists.

In the first experiment of its kind in Asia, 2,000-3,000 male Aedes aegypti mosquitoes would be released in two Malaysian states in October or November. 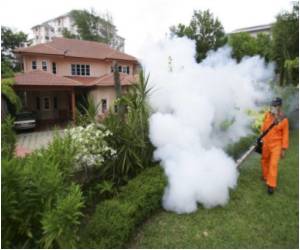 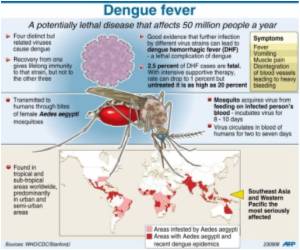 The insects in the study have been engineered so that their offspring quickly die, curbing the growth of the population in a technique researchers hope could eventually eradicate the dengue mosquito altogether.


Females of the Aedes species are responsible for spreading dengue fever, a sometimes deadly illness that has killed 100 people so far this year in Malaysia alone.

The proposal field trial follows a series of lab tests conducted in Malaysia since 2006, and the government is seeking public feedback before moving to the next step.

But environmentalists are not convinced, and are concerned the genetically modified (GM) mosquito could fail to prevent dengue and could also have unintended consequences.

"Once you release these GM mosquitoes into the environment, you have no control and it can create more problems than solving them," said Gurmit Singh, head of the Centre for Environment, Technology and Development.

"There are a lot of risks involved," he told AFP.

Singh said the larvae will only die if their environment is free of tetracycline, an antibiotic commonly used for medical and veterinary purposes.

"If the larvae come into contact with the tetracycline, the chances of the larvae surviving is higher than it dying off," he said.

"We don't know how the genetic flow will be affected. The non-targeted species might be adversely affected and increase the risk of ecological harm."

"We shouldn't take the risk, it is better to play safe," Singh said, adding that current measures to contain dengue outbreaks such as spraying insecticides are still effective if enforcement is beefed up.

The field trial for the GM anti-dengue mosquitoes -- which was developed by a British-based insect bio-tech company, Oxitec -- will be undertaken by the Malaysia's Institute for Medical Research, an agency under the health ministry.

The two groups, through their media firm, declined comment on the trial or respond to the environmental concerns, saying it was inappropriate as their "application is now going through the final stages of regulatory scrutiny".

The Natural Resources and Environment Ministry said on its website that the field trial, if approved, would be conducted on two consecutive days and "in strict adherence to requirements" by the National Biosafety Board.

It said the GM mosquitoes proposed for release contain "a fluorescent molecular marker and a self-limiting construct".

A ministry official confirmed the plan to AFP and said that anti-dengue GM mosquitoes had previously been released in a trial in Cayman Islands in the Caribbean.

Dengue infection leads to a sudden onset of fever with severe headaches, muscle and joint pains, and rashes.

The virus has historically been found in tropical regions, particularly in urban and semi-urban areas, but has spread in recent years to colder and higher places and is now endemic in more than 100 countries.

Timely Treatment is the Only Way to Ward Off Dengue: Azad

Union Health and Family Welfare Minister Ghulam Nabi Azad on Saturday advised people showing symptoms of dengue to go for a check-up and get treatment without any delay.
Advertisement