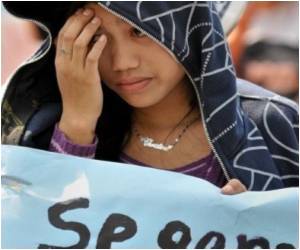 Malaysia households have been thrown into domestic chaos as maids shortage hits the country with a long-standing addiction to cheap foreign labor.

Nearly two million foreigners, mostly from Indonesia, are registered to work in Malaysian homes, shops, factories and plantations, and many more are undocumented, making Malaysia one of Asia's biggest importers of labor.

Study unearths the presence of many child domestic workers in Egypt.
Advertisement

Maids from Indonesia, who toil for as little as 400 ringgit (130 dollars) a month, have no laws governing their working conditions and a spate of shocking abuse cases prompted Jakarta to declare a ban on new arrivals in June 2009.


In an attempt to stem the mistreatment of domestic workers who have been raped, scalded with boiling water and branded with hot irons, the two governments opened negotiations for a formal labour agreement.

Undeterred by sickening tales of abuse, Indonesian women are lining up to work as maids in Saudi Arabia where in just a few years they can achieve an almost unthinkable dream -- financial
Advertisement
However, the talks have stumbled over Indonesia's demand for a minimum wage, prolonging the ban and causing serious inconvenience for families left without a helper -- some 35,000 households according to an industry figure.

"I am struggling without a maid," said Maz, a mother of three who is considering quitting her job as a purchasing officer to take care of the household and her children aged between one and five.

Since becoming a working mum, Maz has had two Indonesian maids who stayed with the family until their two-year contracts ended, but when the last departed in September 2010 there was no one to replace her.

"I have to send my kids to nursery and babysitters now. All the household chores also fall on me after my work, I'm losing quality time to be with the kids so that is why I'm thinking of quitting my job," she said.

"I've tried to get a weekend maid to come in just to do the chores, but even that is very difficult now due to this maid shortage."

The problem may seem remote for countries where live-in help is a rare luxury, but in Malaysia, where there are few childcare centres and elderly relatives are often cared for in the home, it has become a crisis.

The Malaysian Association of Foreign Maid Agencies says the number of foreign maids in Malaysia has dropped from about 300,000 before the ban to 170,000 at present.

Agencies have attempted to source new maids from Cambodia and the Philippines, but there are not enough to meet demand.

The government has rejected a request to lower the minimum age requirement for domestic workers from Cambodia from 21 to 18 years, to allow in more women from the impoverished country, who are typically paid 600 ringgit a month.

"We have tried to source from other countries but there is no supply at all," the association's vice-president Foo Yong Hooi told AFP, adding it was the worst shortage seen in his 10 years in the industry.

"It will affect the productivity of our country because career women will need to take leave to attend to their children and the worst scenario is that those who are desperate will resort to hiring illegal maids," he warned.

Labour rights groups said however that Malaysia only has itself to blame because the lack of legal protection, low wages and the continuing abuse cases have led foreign maids to shun the country.

"It is very clear that the shortage is caused by the way that we are treating our domestic workers. We put them in a condition of slavery," said Irene Fernandez from migrant workers' group Tenaganita.

"It is time for the minimum wage. Malaysians can no longer believe that they can continue to hire a worker in a very cheap and exploitative situation, that perception must disappear," she said.

"If they want to hire domestic workers, they must be prepared to pay decent wages and ensure their rights are protected."

Following the 2009 ban, Malaysia agreed to give Indonesian maids one day off a week and allow them to hold on to their passports -- which had been routinely confiscated by employers intent on preventing "runaways".

But the talks have stumbled over Indonesia's request for a minimum wage of 800 ringgit (260 dollars). By comparison, domestic workers in Hong Kong receive at least 460 dollars a month.

Malaysia's government is uneasy about having so many foreign workers in the country, and Human Resources Minister S. Subramaniam would give no deadline for a conclusion to the prolonged talks.

"The consultation is still ongoing. We hope we can resolve it as early as we can with terms that the two countries can agree to," he told AFP.

"Except for Indonesia, other doors are open. It is a matter of whether the maid agencies are able to bring in those people," the minister said, adding "there is no easy solution".

The Essence of Yoga Accident and Trauma Care Drug - Food Interactions Sanatogen Diaphragmatic Hernia Turmeric Powder - Health Benefits, Uses & Side Effects Indian Medical Journals Loram (2 mg) (Lorazepam) Drug Side Effects Calculator Iron Intake Calculator
This site uses cookies to deliver our services. By using our site, you acknowledge that you have read and understand our Cookie Policy, Privacy Policy, and our Terms of Use