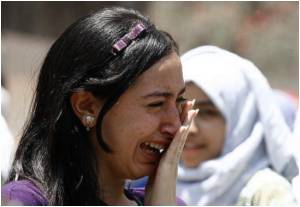 Study unearths the presence of many child domestic workers in Egypt.

Thirteen-year-old Rasha thought she was leaving her home in rural Egypt to help out an elderly aunt in the city for the summer and would return in time for the new school year.

Abusive head trauma among children has skyrocketed since the beginning of the recession in late 2007.
Advertisement

"This summer never ended, and I understood I had become a domestic worker," said Rasha, one of tens of thousands of child domestic workers across Egypt, working without supervision or legal protection in an industry that is only discussed in whispers.


Her testimony appeared in a rare study on child domestic workers in Egypt which was compiled by the Center for Migration and Refugee Studies (CMRS) of the American University in Cairo (AUC).

Children who have been abused psychologically, physically or sexually are at an increased risk of suffering unexplained abdominal pain and nausea or vomiting than kids who
Advertisement
Noha, a 27-year-old Egyptian woman who employs a child-worker to clean her house, said she preferred to deal with children.

"It's easier to give guidance to young girls," she was quoted as saying in the report.

Employers described the process of "moulding" the young girls, which included "educating the child domestic worker on morals (not to steal, not to lie), cleaning standards, and more importantly, personal hygiene," the report said.

Magda said she felt "more secure" with a live-in worker.

"She stays here, knows the system and adapts to our values... I like to bring them young and raise them here in my house," she said.

The number of children employed as street vendors and in agriculture, construction, factories or workshops is estimated between two and 2.5 million in Egypt.

But figures are scarce for children who leave home to work as housekeepers or nannies despite the magnitude of the phenomenon, the study said.

"The incidence of child domestic workers in Egypt remains significant enough to be addressed as a public issue," it said.

There are at least 53,000 child domestic workers in the three mainly rural provinces of Fayum, Minya and Assiut, in a population of 3.13 million households, according to the report which was commissioned by Terre des Hommes and financed by the Swiss embassy in Cairo.

"This kind of work is legally unrecognised, invisible, gendered and morally sensitive," said Ray Jureidini, one of the study's authors.

The majority of the children are girls, often coming from disadvantaged rural families who send their daughters away because they are too poor to raise them, and in the hope of making some money to help sustain the family.

"It's done under necessity, it's an issue of poverty," Jureidini said.

Generally, the girls are asked to clean, run errands, look after children and cook.

Aged between nine and 16, they can work five to 10 hours a day, but are often required to be available around the clock.

The salary, if there is one, is often between 100 to 300 Egyptian pounds a month (18 to 55 dollars) that is often sent back to the family. The workers can find themselves sleeping on a mattress in a shared room.

But some argue that compared to living conditions in their own homes the lives of child domestic workers in employers' homes can be considered an improvement.

Karima, 19, who started working aged nine, does not want to return home.

"It's a prosperous life, the food is clean, the clothing is clean," she said.

But the study also unveiled testimonies of sexual abuse among former child domestic workers, a serious risk for the vulnerable children.

Recruitment is done through family ties, friends or neighbours, or through "mekhademateya," recruiters who get a commission for finding the girls a place to work.

The study recommends a better census on child domestic workers in Egypt and calls for legislation to confront it and other other forms of domestic labour.

The report focused on child domestic workers exclusively in Egypt and did not deal with children who could be sent abroad for work.

The NSPCC says that over two million images of child sex abuse had been circulated by 100 offenders who went on to be convicted in the last 20 months.
Advertisement
Advertisement