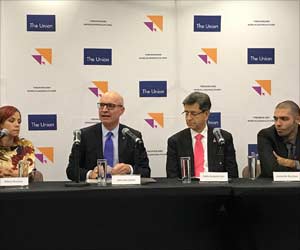 Individuals with diabetes were found to have higher rates of latent TB infection when compared to those individuals who did not, reveals a new study.

Incidentally, the opening day of the largest global lung health conference, also marked the World Obesity Day. One of the important highlights at the 48th Union World Conference on Lung Health was the study that probed if diabetes affects latent (or dormant) TB infection.

Advertisement
‘Individuals with latent TB infection are not infectious. There are no symptoms seen and cannot spread the infection to others.’

Earlier a few studies have shown that people with diabetes who have poor glycemic control (or diabetes control) are at especially high-risk to develop active TB disease. But only a few studies done before, have investigated the relationship between diabetes and latent TB infection, and none of these studies have been population-based and were all in high-risk individuals.

Dr Leonardo Martinez, Post-doctoral research fellow, Stanford University School of Medicine, Stanford, USA, who is among the study researchers, shared the outcomes of the study "Promising results for an investigation of Glycemic control and prevalence of latent tuberculosis infection (LTBI): population-based study".

He said that poorly controlled diabetes presents a higher risk for latent TB infection and that this may be a group to target for latent TB testing and consideration of latent TB therapy.

This population-based study of 4215 individuals in the United States tested for latent TB infection and several biomarker tests for diabetes. This included 776 people with diabetes, 1441 people with pre-diabetes condition, and 1998 people without diabetes.

The study shows that people with diabetes had higher rates of latent TB infection than those who did not have diabetes.

For example, people with undiagnosed diabetes (who often have uncontrolled diabetes) had 12 percent prevalence of latent TB infection; a rate 3-4 times higher than the general population. People with diabetes with high levels of fasting plasma glucose, a biomarker of poor glycemic control also had significantly higher rates of latent TB infection.

Governments of over 190 nations globally have committed to end TB by 2030 and reduce untimely deaths due to diabetes and other non-communicable diseases (NCDs) by one-third by 2030. If we are to end TB, we cannot ignore the mountainous reservoir of latent TB infection in our population. Experts estimate that in high burden nations like India, up to one-third of the population might have latent TB infection.

In this reservoir of millions of people some develop active TB disease. But there is hope because isoniazid preventive therapy (IPT) can cure latent TB infection. Despite promise since years, to provide IPT to those with latent TB infection, a lot more action needs to happen to effectively target this dormant TB pool.

Dr Pablo Antonio Kuri Morales, Under-Secretary for Prevention and Health Promotion, Mexico, said to CNS (Citizen News Service) that diabetes is associated with unhealthy lifestyles too, whereas TB is mostly affecting under-privileged people in our population.

It is important for both TB and diabetes experts and programme people to understand how can the two interventions work together effectively so as to help increase public health outcomes of both programmes. We need to share information and data, and also seek collaboration with other ministries and partners who can help mitigate social determinants of TB and diabetes.

Dr Martin Castellanos Joya, National TB Programme expert from Mexico, presented at a special Symposium organized by the World Health Organization (WHO) before the opening of the 48th Union World Conference on Lung Health in Guadalajara.

The evidence-based guidelines on TB and Diabetes have already been adapted to Mexican setting and implemented to respond to "dual challenge" posed by TB and diabetes, said Dr Joya.

"We need to plan together with other partners and stakeholders to address TB and diabetes. People who are working to control diabetes and TB both must actively participate in joint programming, training and monitoring, for example. Bi-directional screening is already being rolled out in Mexico with TB patients being tested for diabetes and people with diabetes being tested for TB. Treatment should be simultaneous for TB and diabetes" said Dr Joya.

Every week a glycemic test is done for such patients with TB and diabetes both, and preferably an insulin-based diabetes treatment is provided.

Incidence of people with TB who also have diabetes in Mexico has shot up significantly by 287% between 2003-2016. Sign of hope is that treatment success rate for TB in such patients is 89%. "We need to increase the service coverage and cure rate for TB and diabetes both" said Dr Joya.

Let's hope that the 48th Union World Conference on Lung Health, the first-ever WHO Global Conference on NCDs which will open later this month in Uruguay, and the WHO Global Ministerial Conference in Moscow next month on "inter-sectoral response to end TB" galvanizes a united response for health security globally.

TB Infection Rates Set to Turn Clock Back to 1930s, Says Report
Despite major progress in all fields of medicine, tuberculosis remains a massive threat to mankind....

TB Infection may be Underestimated Among People Taking Corticosteroids
New research suggests that tuberculosis infection among people taking corticosteroid pills may be .....

Unrest Amidst Commercially-available Diagnostics for Latent TB Infection
New study reveals that in populations with a low tuberculosis (TB) incidence the majority of ......