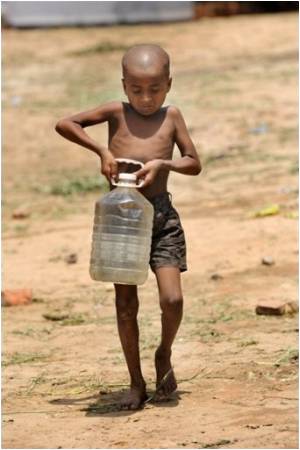 Libya's revolution is being helped by children in Benghazi by cleaning streets, working as traffic cops and dishing up army rations to rebel soldiers..

Schools shut down when the uprising against Moamer Kadhafi started in mid-February, and officials in Benghazi say they will not reopen until the strongman is toppled and the rebel-held east is reunited with the west.

In the meantime an army of kids in this city of 700,000 has to find ways of keeping itself busy and getting ready for what the rebels hope will be the post-Kadhafi era.


One example of revolutionary zeal is on display every evening at one of the city's busiest junctions, where children in dark-blue traffic police uniforms blow their whistles and gesture frantically to keep rush-hour motorists moving.

Toys and parks are no longer safe for children. It is the main cause for lead poisoning.
Advertisement
"This is more fun than school," said 10-year-old Ali Selim as he took a break Monday from the duties he carries out every day from 5:00 pm until after 9:00 pm.

Two brothers aged 14 and 15 were also working at the same junction, part of a tiny team of boys who have been helping adult traffic cops in this time of revolution.

Other youngsters are working for the revolution in far greater numbers. Platoons of boys and girls have been formed across the city to rid their neighbourhoods of the trash that litters the streets.

"We're doing this work voluntarily because we've got lots of free time -- we've got free time to clean our city," said one youngster as he and his team-mates combed their district for garbage.

Many of the city's young men who have turned 18 have signed up for the military training that the rebel administration -- whose headquarters is in Benghazi -- is providing to build up its army to fight Kadhafi's forces.

Some of those too young to become fighters are helping out at a giant canteen which feeds the rebel force as well as families who have fled to Benghazi from regions under Kadhafi control.

Other youngsters are lending a hand in a refugee camp that has been taking in African migrants and Libyans from Misrata, a western city besieged by Kadhafi forces where hundreds have been killed over the past two months.

And on Benghazi's seafront, young people take part in or organise the daily rallies that are held to show support for the revolution and contempt for the Libyan strongman who has been in power for 41 years.

But even with all that activity, there are still many youngsters left idle and for whom the novelty of an extended school holiday has long worn off.

"When I get up in the morning, I just stay at home for a couple of hours then I go out to see my mates in the street then I go back home," one boy, sitting on a street corner, told AFP, declining to give his name.

The rebel National Transitional Council has taken measures to help boys like him.

It has started to use schools as daytime activity centres to give young people something to fill their time and to help them get over the trauma of the violence on the streets of Benghazi before Kadhafi's forces were chased out.

Volunteers, many of them teenagers, run these centres.

Al-Majd school, which lies opposite a mosque in the residential suburb New Benghazi, takes in more than 500 kids every day.

"I love coming here because we can do everything in the same day --- sing, dance, draw, play games," said 10-year-old Aya al-Abar, as she took a break from a group of girls chanting revolutionary slogans such as "Freedom for Libya, Kadhafi get out."

Elsewhere in the school children engaged in water fights or drew revolutionary posters, while in one classroom toddlers -- some with the rebel colours green, black and red painted on their cheeks -- made castles with play dough or staged battles with toy soldiers.

Parents bringing their kids to the school said they weren't too worried about them losing half a year's education, with several remarking that they had "lost" 41 years under Kadhafi, so one more didn't really matter that much.

Apart from an occasional class on why the Libyan revolution took place, there is no formal education going on here at the moment.

Hanna al-Gallal, the most senior education official in Benghazi, said schools would reopen once Kadhafi had fallen and only then would a new curriculum -- free of propaganda about the old regime -- be drawn up.

Until then, she said, the not-so-young people of what the rebels call "Free Libya" had a lot to learn from the youth, who like those in Tunisia and Egypt were the main drivers of the popular uprising.

"They will teach us about the revolution. They are the ones who came out and demanded a better future," she said.

If you are allergic to certain food items-Watch out for what you eat
Advertisement
<< Mortality Following Angioplasty Could be Predicted by Eleva...
Bears Exploited for Bile in Asia >>