Legal Firearm Licenses Given to 11 Year 0ld Children in Queensland 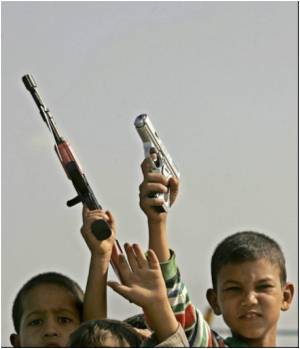 Even 11 year old children are able to get legal firearm licenses in Queensland while some people would like to see the legal age to go down even lower.

According to the Courier Mail, information released under Right to Information laws showed 86 children aged 11 or 12 hold firearms licences in the country.


As of May this year, 1291 children aged below 18 years were legally able to operate a weapon despite being deemed too young to vote, or drink alcohol.


The report also said that most of the pre-teens sought licences for shooting club purposes, but 14 were granted a gun licence for rural use.

The largest numbers of young pistol-packers were in the Warwick and Toowoomba area, where some parents consider shooting a valuable life skill.

"A lot of children do shoot at home on their own properties because it's a private residence, but because of the law they can't do it on the (shooting) range," the paper quoted Warwick branch president of the Sporting Shooters Association, Mal Smith, as saying.

Smith believes that shooting makes young people responsible in a similar way to learning to drive.

However, some people oppose this notion.

John Crook, from Gun Control Australia, said he would prefer to see the gun license age raised to 25 for men and 18 for women.

According to the paper, the police service statistics show that more than 15,000 firearms were registered in Gympie and surrounding areas, which equated to about one gun per 2.5 residents.

Popularization of Toy Guns Among Assamese Kids Provokes Peaceful Demonstration
In a telling statement, peace lovers in Guwahati organized a rally on Thursday against popularization of toy guns among kids.
READ MORE