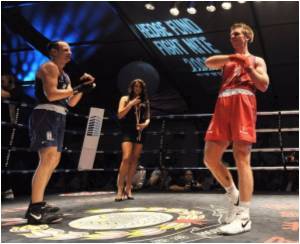 Boxing is a good way to relieve stress, feel many women who are taking up what was once viewed as a man's sport.

Just like in the movie 'Fight Club', starring Brad Pitt and Ed Norton, businessmen in London have been competing in such events for years, and now for the first time women are taking to the ring.

The only thing, however, that differentiates the ladies from the gents, is the chest protectors they wear underneath their bras.


abina Begum, 25, and Tiffany Simons, 33, are two such women who have taken up boxing as a stress reliever.

"Boxing's changed my life. I needed a way of coping with work stress and this gives me the buzz I need," News of the World quoted Simons as saying.

Exercise is about revamping your lifestyle, not just weight loss. Exercise to get healthy - that way, you'll last longer at it and get better results.
Advertisement
Begum agrees with her, saying: "Training gives me a high and landing punches makes me feel good."

Their sparring in the ring is very much admired by the men.

"You've got to have a lot of balls to get into that ring. I admire any woman who can do it," Dan Walker, 28, a banker who's watching the pair spar, was quoted by the report, as saying.

"These are also key attributes for women in high-powered jobs. They're used to working in male-dominated environments and going into the ring in a traditionally male-dominated sport is another way of proving they can take on the boys," he added.

And it's not just their fitness levels that improve - job prospects could, too.

"Boxing can help women increase their confidence for confrontations at work, as they're less likely to feel intimidated," Lane said.

"You need to be single-minded to box, and the sport's ultimately about being the last one standing. In that sense, the training and competition are great preparation for sealing a deal in the boardroom," he stated.

Eat and Stay Slim With Boxing the Helena Christensen way!

Want to stay slim while eating whatever you want? Start boxing - at least that's what model and editor Helena Christensen does.
Advertisement
<< Legal Firearm Licenses Given to 11 Year 0ld Children in Quee...
Number of Cancer Survivors Who Live With Their Minor Childr... >>