Laguiole Knives can Now be Made-in-China 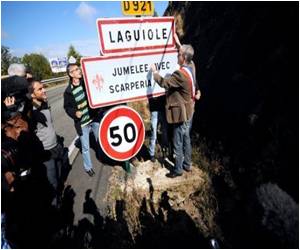 Laguiole is a French village, synonymous with the manufacture of France's most famous knives. The residents of Laguiole have symbolically 'unnamed' the place in protest at losing control of the name.

The villagers are furious that the name Laguiole has passed into the hands of an entrepreneur who allows it to be used to sell made-in-China knives and barbecues.

Looking for a job in France is a new vineyard worker.
Advertisement

To the cheers of around 200 locals, mayor Vincent Alazard pulled down a sign at the entrance to the village in the Aveyron region of southwestern France.


"Our name no longer belongs to us, so what do you want us to do with this sign," the mayor told the assembled protestors. "We are going to take it to Paris and give it to those who have taken it away from us."

A ban on the usage of the words 'mother' and 'father' from all official documents is being planned by the French government under controversial plans to legalise gay marriage.
Advertisement
Earlier this month, the village lost a legal battle to reclaim rights to the name from Gilbert Szajner.

The businessman registered Laguiole as a trademark in 1993 and has since licensed its use for products including clothes, table and bed linen, lighters and barbecues, as well as the cutlery which originally made its name.

Under the terms of the brand's registration, anyone can use the name Laguiole for knives but the villagers would have to pay Szajner if they want to diversify and produce any other products under that name.

"The word Laguiole has been kidnapped. It has been stolen from us," said Michel Bras, owner of the village's Michelin three-star restaurant.

"It is very easy to ride on the backs of people who made sacrifices, who made the most of what little they had, to establish the name of this area," he added. "These people have been swindled by someone who does not know the place."

Many of the windows of the cutlery shops that abound in the village have "For Sale" signs in them. They are ironic for the moment but reflect a genuine fear for the future, according to Thierry Moysset, director of the Laguiole Foundry, which would like to expand its range of products sold under the village's name.

"I'm trying to generate jobs here but the law forbids me from doing it," he said. "It is a crazy situation."

The local council attempted unsuccessfully to persuade a Paris court to annul the trademark registered by Szajner on the grounds that his use of it could lead to consumers being confused about the origin of products.

The court ruled that the name of the village was not sufficiently well-known to constitute a de facto marque and that Laguiole knives had become a generic product not necessarily linked to a particular place.

An appeal is being planned. In the meantime, local officials hope to persuade the government to pass a law protecting village names and to create a wine-style system of labelling manufactured products by their origin.

Tanya Heath is out to prove women can wear heels without ruining their feet.
Advertisement
<< Starbucks in India From Next Month
Are You Smart Enough To Work At Google? >>

Turmeric Powder - Health Benefits, Uses & Side Effects Post-Nasal Drip Diaphragmatic Hernia Pregnancy Confirmation Calculator The Essence of Yoga Indian Medical Journals Blood Pressure Calculator Drug Side Effects Calculator Find a Hospital Find a Doctor
This site uses cookies to deliver our services. By using our site, you acknowledge that you have read and understand our Cookie Policy, Privacy Policy, and our Terms of Use