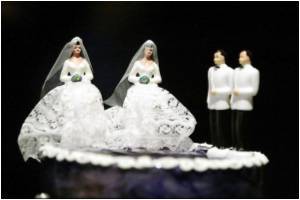 A ban on the usage of the words 'mother' and 'father' from all official documents is being planned by the French government under controversial plans to legalise gay marriage.

This means only the word 'parents' would be used in identical marriage ceremonies for all heterosexual and same-sex couples.

A survey has revealed that fifty-three percent of Americans have supported for the first time a move to make gay marriage legal.
Advertisement

According to the Daily Mail, the draft law states that 'marriage is a union of two people, of different or the same gender'.


It further says "all references to 'mothers and fathers' in the civil code, which enshrines French law, will be swapped for simply 'parents'."

The law would also give equal adoption rights to homosexual and heterosexual couples, the paper said.

Gay marriage supporters faced off with police in San Francisco after the California Supreme Court upheld a voter-approved ban on same-sex weddings.
Advertisement
Meanwhile, the head of the French Catholic Church Cardinal Philippe Barbarin warned followers last week that gay marriage could lead to legalised incest and polygamy in society.

"This could have innumerable consequences. Afterward they will want to create couples with three or four members. And after that, perhaps one day the taboo of incest will fall," the paper quoted him, as saying.

Leading French Catholics have also published a 'Prayer for France', which said 'children should not be subjected to adults' desires and conflicts, so they can fully benefit from the love of their mother and father.'

The northwestern US state of Washington may soon permit gay marriage after a favourable vote was cast by a renowned lawmaker.
Advertisement
<< Telomere Length Indicates Life Expectancy in Mammals
Early Signs of Parkinson's Could Be Detected With The Help ... >>