Korea to Develop Healthier Kimchi on Par With Global Trends 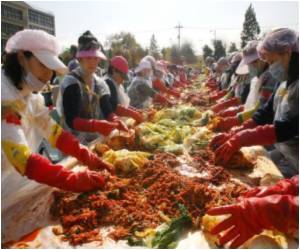 A South Korean firm said Wednesday it plans to develop a healthier, low-salt version of the country's signature dish kimchi in line with global trends.

Kimchi, a fiercely spiced mixture of pickled cabbage, radish and cucumbers, is prized for its healthy ingredients -- apart from the salt.

Daesang FNF said it would reduce the salinity rate to 1.6 grammes of salt for every 100 grammes of kimchi next year, compared to an average 2.0 grammes currently and 2.5 grammes over 20 years ago.


The government has been working to globalise Korean food including kimchi.

"In order for kimchi to appeal to foreigners as a healthy food, it is necessary to lower the level of salt," said a spokeswoman for Daesang FNF.

Blood pressure is the pressure of the blood flowing through your blood vessels against the vessel walls. Just by entering you age, you can get the accurate range of blood pressure value.
Advertisement
"The amount of sodium will differ but the taste will be the same as the original flavour."

The Korea Centers for Disease Control and Prevention has found that Koreans consume more than double the World Health Organisation's recommended daily intake of salt, putting them at risk of ailments such as hypertension.

The Korea Food and Drug Administration is working to cut the sodium rate in food but kimchi is not a priority.

"Although kimchi can be salty, it is not considered unhealthy," an administration official told AFP. "The salty flavor is important, although it shouldn't be too much."

The side dish has its own museum in Seoul and an annual festival, and was even blasted into space with the country's first astronaut in 2008.

It stealthily creeps in and catches people unawares. Find out more about this 'silent killer' by participating in the quiz.
Advertisement
Advertisement
This site uses cookies to deliver our services.By using our site, you acknowledge that you have read and understand our Cookie Policy, Privacy Policy, and our Terms of Use  Ok, Got it. Close
×