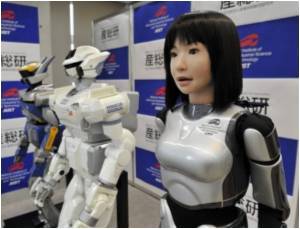 A robot, developed by Japanese researchers, that imitates speech and mannerisms sent through the video-phone makes virtual visits by distant callers possible.

Dubbed the Telenoid R1, the robot will allow "people to feel as if an acquaintance in the distance is next to you," according to its developers, Osaka University and the Advanced Telecommunications Research Institute.

Robotic Help for the Elderly in Japan

Inventions that involve robots for almost every activity were on show at a robotics fair in Japan where an increasingly aging population needs assistance in its daily routine.
Advertisement

A sensor will transmit the caller's sounds and movements of the head, face and arms to a robot near the recipient, the developers said.


In one demonstration, the robot relayed the voice and movements of a grandchild speaking to a grandfather, saying "I'd like to visit your place... but now my private tutor is here to teach me."

Jiffy Snacks from a Robot

American scientists have created a new robot that can deliver snacks.
Advertisement
In another demonstration, the same robot, transferring a doctor's presence, asked the same old man: "How are you feeling lately?"

The developers expect the robot to be used in real-life situations, for example in homes to provide company to elderly people living alone.

The robot has been made to look similar to a human but without hair, to appear "as both male and female, as both old and young," the developers said.

The robot is expect to sell for about three million yen (34,000 dollars) for research purposes and 700,000 yen for general purposes.

American researchers are using a robot to find out how humans decide to trust strangers and if those decisions are accurate.
Advertisement
Advertisement
This site uses cookies to deliver our services.By using our site, you acknowledge that you have read and understand our Cookie Policy, Privacy Policy, and our Terms of Use  Ok, Got it. Close
×