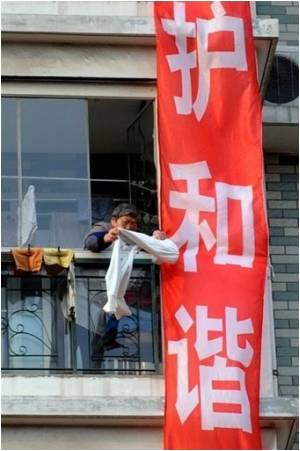 China's effort to back Mandarin over Cantonese caused hundreds of campaigners in Hong Kong to protest against the move.

The group marched to government headquarters to call for the co-existence of the two Chinese language dialects and the preservation of Cantonese culture. 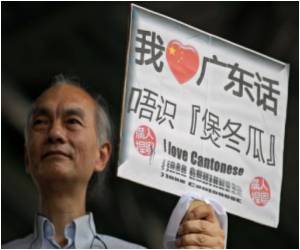 Beijing made Mandarin the countrys official language in 1982 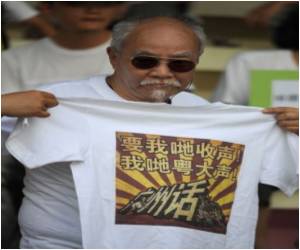 A man holding a T-shirt saying, "The more you try to silence us, the more we will speak out" 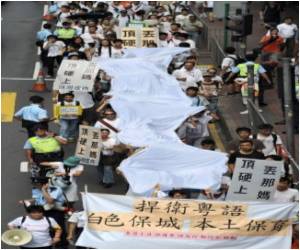 Cantonese is the mother tongue for an estimated 70 mln people


"We want to show our support to our Guangzhou friends in their campaign to protect Cantonese against any threat of elimination," said Choi Suk-fong, organiser of the rally.


Participants wore white T-shirts with a logo which said: "You want us to shut up! We will speak louder in Cantonese!"

The rally was called after a political advisory body in Guangzhou wrote this month to bureaucrats proposing local TV stations broadcast their prime-time shows in Mandarin instead of Cantonese ahead of the Asian Games there in November.

The proposal sparked fears among many Cantonese speakers about the future of a language that is the mother tongue for an estimated 70 million people in Hong Kong, Macau and China's southern Guangdong province, and is widely spoken in overseas Chinese communities.

It also triggered last week's march in Guangzhou in which hundreds of people took to the streets in defiance of government orders.

A number of Guangzhou residents crossed the border to take part in the Hong Kong rally, saying that authorities there were trying to suppress the protesters.

"I really regretted not going to the rally in Guangzhou last week. I came to Hong Kong today because I want to protect my own culture. Unlike on the mainland, here I can voice my view more directly," said 21-year-old Wyman, who refused to give his family name for fear of retaliation by the Chinese authorities.

The Guangzhou city government on Thursday sought to deny rumours that they planned to ditch Cantonese in favour of Mandarin, according to the state-run Guangzhou Daily.

Its spokesman Ouyang Yongsheng was quoted as saying that the government had a responsibility to protect and promote Cantonese culture, including the language.

"The citizens and concerned people can be reassured that Guangzhou would... not go for the so-called cause of 'abolishing Cantonese to promote Mandarin'," he said.

China has long been a patchwork of often mutually unintelligible dialects.

Beijing made Mandarin the country's official language in 1982, leading to bans on other dialects at many radio and television stations.

The dialect has been further promoted in recent years as migrant workers moved to China's coastal areas to find jobs.

Mandarin language lessons only became compulsory in schools in Hong Kong after its return to Chinese rule in 1997 and an increasing number of professionals began to learn the dialect after the handover as Hong Kong's business links with the mainland intensified.

However, many Hong Kongers are fiercely proud and protective of Cantonese and see Mandarin only as a language of convenience.

How Language Influences Thoughts
A new study has pointed out that the language a person speaks has an influence on the manner of thinking.
READ MORE

New Method Highlights Brain's Language Areas: Neuroscientists
MIT neuroscientists have reported on a new method to analyze brain imaging data - one that may paint a clearer picture of how our brain produces and understands language.
READ MORE

Data Shows Half of British Pupils Shun Foreign Languages
EU data released Thursday shows that one in two British pupils in their final years at secondary school are not learning a foreign language with one in five in Ireland also shunning overseas tongues.
READ MORE

Learn Chinese - Hit the Right Notes!
Do you want your child to have the perfect pitch? Well, then start him or her early on Mandarin or Vietnamese lessons, that's the suggestion of a new study.
READ MORE