Robotic Help for the Elderly in Japan

Inventions that involve robots for almost every activity were on show at a robotics fair in Japan where an increasingly aging population needs assistance in its daily routine.

To ease the burden in a nation with one of the world's highest life expectancies, engineers have come up with technologies to make life easier for the elderly and disabled, and their caregivers. 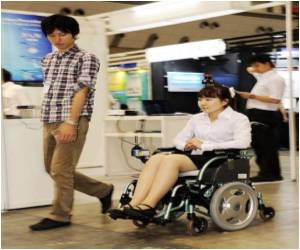 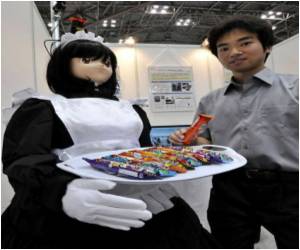 
A new robot wheelchair developed at Saitama University near Tokyo doesn't need to be propelled manually by the user or pushed by a caregiver but can instead automatically move besides a walking person.


"Imagine if you enter a store having somebody push your wheelchair," said one of the researchers, Yoshinori Kobayashi, assistant professor for information science and technology at the university.

"Your relationship with him or her may not look equal to a store clerk or onlookers. You would fail to be treated as an independent person."

The wheelchair is fitted with a camera and sensors that detect both the caregiver and obstacles ahead to safely guide the vehicle, which can also be stopped or overridden with a joystick by the person in the wheelchair.

Kobayashi, pointing at a shortage of caregivers in Japan, said the team is working on a system that would allow more than one automated wheelchair to follow a caregiver at the same time.

Another innovation to make life easier for the disabled is the "RAPUDA" robotic arm, a "portable manipulator" being developed by Woo-Keun Yoon of the National Institute of Advanced Industrial Science and Technology.

Patients who are largely paralysed but can move some part of their body, such as a fingertip, a toe, or their neck, will be able to control the arm and utilise its reach and strength.

The arm can be attached to wheelchairs, tables and other objects and extended to up to one metre (three feet) to pick up objects, helping improve quality of life for the disabled, said Yoon.

"It's important that you can have tea when you want to, or pick up what you like in a shop," Yoon said. "Otherwise you have to ask people many times... and end up saying 'thank you' many times and exhausting yourself."

Another invention from Saitama University, still in the development phase, is a robot that is being designed to serve its human masters and predict their wishes by literally reading their faces.

With its female appearance and dressed, manga-cartoon-style, in a French maid uniform, the humanoid on display at the fair can move about with the help of a Segway people mover hidden under its full-length skirt.

Sensors and software inside the machine are designed to detect when a human being is looking at it and to respond by, for example, bringing the person a drink, said Kobayashi, adding that the robot-maid could one day work in homes for the elderly and restaurants.

Learning about the complexities of human behaviour will be a challenge, said Kobayashi, adding: "Humanoids need to learn how they should behave so as not to leave one particular person in a group unattended."

Japanese researchers have come up with other "welfare robot" devices in recent years, including the "YURINA", made by Japan Logic Machine, a wheeled robot that can lift bed-ridden people with its arms.

After receiving instructions on a touch panel embedded in the robot's head, it can lift a patient's legs to change their diapers, or place them in a hammock to carry them safely for a bath.

"Elderly care requires a lot of heavy physical work," said marketing official Yoshitaka Takata. "This robot can be a lot of help."

Japanese people are living longer than ever, with the average life expectancy now a world-record 86.44 years for women and 79.59 years for men, the health and welfare ministry said Monday.

Japan Baby-robot Imparts Parenting Techniques
It giggles and wiggles its feet when you shake its rattle, but will get cranky and cry from too much tickling: Meet Yotaro, a Japanese robot programmed to be as fickle as a real baby.
READ MORE

Boffins Seek Help From Robot to Determine How Humans Trust Strangers
American researchers are using a robot to find out how humans decide to trust strangers and if those decisions are accurate.
READ MORE