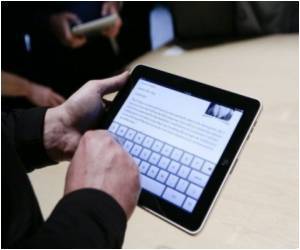 A manufacturer tries to solve the problem of typing problems in iPad, by coming up with a new device that uses a series of hammer to translate key-presses into touch-screen pushes.

Every time you strike a key, a little hammer will jump out of the typewriter, and prod your iPad with a little rubber 'capacitive cap', which delivers a minute electrical discharge to mimic your finger prods.

Autodesk released a major update to SketchBook Pro software that has artists switching from pencils and paints to virtual canvasses on iPhones or iPad tablet computers.
Advertisement

iTypewriter was created by Austin Yang, a student of product design and mechanical engineering at the Edinburgh College of Art in Scotland.


"Users can enjoy the old feeling of typing and also the latest technology," the Daily Mail quoted Yang as saying.

"Even though the elder users who have never used the computer or ipad, they can use this familiar typewriter and type in the familiar operation way.

Apple is targeting the textbook market. The California-based gadget-maker unveiled a free application for the iPad called iBooks 2 on Thursday that brings interactive textbooks to the popular tablet computer
Advertisement
"For some specific group of users, this product provides an easier way to type on the iPad. People could be able to recollect old experience and memory by familiar appearance and haptic feedback.

"Instead of stroking on the screen with no feedback, this product can reflect a strong haptic feedback.

"User can experience the physical strength transfer from the keypad and the movement of each key," he added.

Staying Connected Even During Vacation: Internet Obsession Much?

According to a study use of smartphones, tablets and laptops has become an integral part of vacations.
Advertisement
<< Asking Women What They Want to Improve Maternal Health
'Perpetual' Power Cuts Causes 'Painful' Divorces in Egypt >>