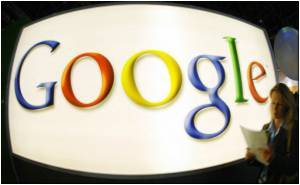 A startup on the edge of its campus is readying glasses that overlay the Internet on the world in 3D, while Google prepares to release eyewear that provides a window to the Web.

Atheer Labs on Thursday provided the first public look at prototype eyewear that lets people manipulate virtual objects, maps and more in the air in a style reminiscent of a scene in the film "Minority Report."

"The whole idea is that technology is becoming smart enough to wrap itself around you," Atheer co-founder and chief executive Soulaiman Itani said while providing AFP a demonstration.


"It is an opportunity of taking the Internet and making it much more immersive, connected and helpful in a non-intrusive way; like our hidden guardian angel."
Advertisement
Itani and Atheer chief technology officer Allen Yang described what their team is building as an extension of the trend of sophisticated mobile technology bringing Internet services to people when they want.

"The next step, we believe, is natural interaction through computer vision," Itani said.

"We worked hard to do that in portable fashion," he continued. "This is like putting the Xbox and the Kinect and the Internet in your pocket running on a battery."

Atheer is working on versions of the eyewear that access the Internet by wirelessly connecting to smartphones or Wi-Fi hotspots and which have telecom chip capabilities to link to mobile phone networks.

A prototype device in the Atheer office in a building on the Google campus in the Silicon Valley city of Mountain View allowed a virtual map to be scanned with the turn of a head and virtual objects manipulated.

"It is like the Internet now is stuck behind these windows we look through," Itani said. "Breaking that and putting it in 3D around you everywhere is a great shift."

He gave the example of a wearer pausing to window shop and having discounts, exclusive items or other information pop up for them to see.

Atheer is designing voice controls and camera capabilities into the Android-powered eyewear, which will keep Internet imagery invisible until it is needed or until summoned with a gesture.

"Our mobile 3D platform fundamentally alters the way people access information on the go, adding a natural interface that can be controlled with natural gestures and motions," said Itani.

To address the kinds of privacy concerns that have been expressed about Glass, Atheer is developing a way for businesses or property owners to detect when devices enter and ask that camera features be turned off.

"It is basically a system for letting people say that on their land, you can't take video without their permission," Itani said.

The system will include a way to verify if someone has disabled the eyewear camera.

"In the end, these things are really decided by society," Itani said. "Our role is to give them all the options.

Itani and Yang would not discuss what, if any, talks they have had with Google about their project.

"Google is really the pioneer in this field with Glass, and in many ways this complements that," Yang said.

Atheer is building a network of developers to craft useful or fun applications for the eyewear and partners for making the gear fashionable.

A product wasn't expected to be ready for consumers until next year.

Google Glass was a common sight early this month at a software developers conference in San Francisco, where software savants here shared visions of games, weather reports, news and more delivered to the Internet-linked eyewear.

Glass connects to the Internet using Wi-Fi hot spots or, more typically, by being wirelessly tethered to mobile phones. Pictures or video are shared through the Google Plus social network.

Google executive chairman Eric Schmidt said recently that it will take "a while" before consumer versions of Glass are available.

Source: AFP
Advertisement
<< Want to Know What It Takes to Live Up to 100 Years? Read On...
Pulitzer Photo Prize Awarded To AFP Freelancer >>

Google glass Makes an 'Entrance'
New Facebook and Twitter applications were developed for Google glasses, with developers keen to ......