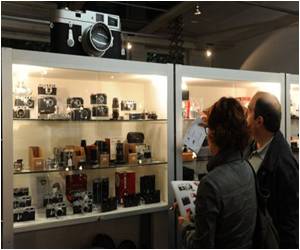 For his artistic photograph of a rebel sniper's nest in Aleppo, Javier Manzano, a freelance photographer working for AFP in Syria, received a prestigious Pulitzer prize in New York.

The ceremony at Columbia University was attended by several hundred people celebrating America's highest journalism award, as well as prizes for literature, theater and music.

Manzano, 37, said he was "honored" by his feature photography nod for the picture taken in October, showing rebel fighters lit up by sunlight coming through bullet holes in the side of a warehouse.


"It is also mixed feelings and lots of my colleagues can relate to that," he said.

"You are receiving an award in recognition for a war that is still going on and will still go on for the foreseeable future, with horrible consequences for both sides. I hope that this furthers the message of Syria and what is going on there on a daily basis."
Advertisement
He received a $10,000 cash award, along with the certificate.

Paul Tash, chairman of the Pulitzer Prize board, said the quality of entries was high, despite crashing budgets for news organizations.

"My first Pulitzer board meeting was in 2006, a high-water mark in advertising revenues for American newspapers," he said.

"Since then, the combination of economic crisis and competition from digital alternatives has sent advertising revenues plummeting by more than half. Today, 15,000 fewer journalists have jobs at American newspapers than in 2006."

Manzano, who is unmarried and calls Istanbul home for now, said he does not have any immediate plans for the future. But he hopes to return to Syria and head for other hotspots in the region "for the next couple of years."

He has been a freelancer, covering the drug war in Mexico and the wars in Afghanistan and Syria since his last employer, the Rocky Mountain News, shut down in 2009.