Inhibiting an Enzyme Can Reduce the Risk of HIT: Study

Inhibition of a single enzyme can reduce the risk of heparin-induced thrombocytopenia (HIT), according to clinical scientists at Ludwig-Maximilians-Universitaet (LMU) in Munich. The findings appear in the journal Blood Advances. 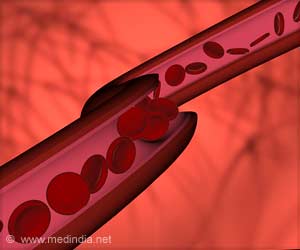 Inhibiting an Enzyme Can Reduce the Risk of HIT: Study

Heparin is frequently employed to mitigate the risk of clot formation in the leg veins following surgery, to treat venous thromboses and to prevent thrombotic occlusions of arteries in patients at risk for heart attacks.

However, the agent can also lead to a reduction in the numbers of thrombocytes (otherwise known as platelets) in the bloodstream - an effect known as HIT. Up to 3% of patients who are treated with heparin develop an immunologically triggered subtype of HIT (called type II HIT), which is surprisingly associated with an increase in the incidence of thromboses (clots) in the blood vessels that are potentially life-threatening.

The incorporation of platelets into the blood clots explains the occurrence of thrombocytopenia. A new study directed by Wolfgang Siess, Professor of Cardiovascular Pathobiochemistry at LMU's Institute for Prophylaxis and Epidemiology of Cardiovascular Diseases (IPEK), has now demonstrated that this hazardous side-effect can be effectively prevented in vitro by the inhibition of a specific enzyme.

The discovery provides a new option for the treatment of type II HIT. The study was carried out in collaboration with research groups led by Professor Michael Spannagl (Department of Transfusion Medicine, Cell Therapeutics and Hemostaseology, LMU Medical Center) Professor Christian Weber and Dr. Philipp von Hundelshausen (both IPEK).

Heparin is a large, negatively charged linear polysaccharide made up of a variety of repeat units. Type II HIT is caused by the formation of antibodies that are directed against a specific molecular complex made up of heparin and a protein called PF4, which is secreted by platelets.

The so-called Fc domain of the antibodies binds to the corresponding Fc receptor found on the platelet surface, which results in activation of the cells.

The activated platelets form aggregates and secrete proteins which mediate the binding of platelets (thrombocytes) to the inner surface of the blood vessels (endothelium) and to certain types of white blood cells (monocytes and neutrophils).

This leads to the formation of thrombin and fibrin, and together with platelet activation triggers clot formation. - Hence heparin actually provokes the effect that it is intended to inhibit. "The complex pathogenesis of type II HIT is quite well understood, but the standard therapy of the disorder is suboptimal," says Siess.

We found that each of the six Btk inhibitors we tested was indeed able not only to reduce but to completely block Fc-receptor induced platelet aggregation and secretion in blood. In addition, they all blocked the interaction of thrombocytes with neutrophils - thus preventing the formation of potentially harmful thromboses," Siess explains.

"This was a very pleasant surprise for us, as earlier investigations had shown that Btk inhibitors could only partially block platelet activation induced by stimulation of a different receptor."

Inhibitors of Btk therefore offer a new promising therapeutic option for type II HIT, as they target an early and crucial step in the process that gives rise to the disorder. The inhibitors employed in the study have the additional advantage that they have either been approved for the treatment of other diseases, or have been successfully tested in clinical trials.

An individual's body mass index (BMI) not related to venous thromboembolism (VTE) rates, but renal function did have an impact, says study.

Food preservatives are basically antimicrobials or anti-oxidants that help preserve food by destroying the microbes and stopping decomposition of food products.

Inexpensive Drug May Down Treatment-resistance in Leukemia Weed can Impair Your Driving Skills Long After the High is Gone Better malaria therapies possible by Knowing Drug Interactions Experimental Drugs Inhibit Bone Loss Due To Chemotherapy Very Long-term Medication for Schizophrenia is Safe: Study