Inflammation in Genital Organs Decreases the Potency of Tenofovir Gel 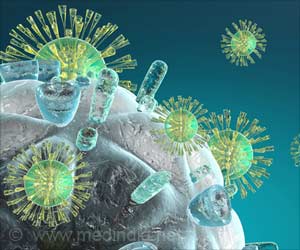 Genital inflammation in women reduces the efficiency of the tenofovir gel that protects them from HIV infection, finds a study conducted at the Centre for the AIDS Programme in Research in South Africa (CAPRISA) and Columbia University's Mailman School of Public Health. The study indicates that both genital inflammation and adherence should be attended in order to increase the potency of topical pre-exposure prophylaxis strategies for preventing HIV infection in women. The findings of the study are published in the journal Nature Medicine.

The researchers measured small proteins, known as cytokines, in the vagina. Raised cytokines levels in the vagina indicate the presence of inflammatory immune responses, even in the absence of clinical symptoms.

Advertisement
‘Inflammation in women genital organs reduces the efficiency of tenofovir gel, that is used as a preventive measure against HIV infections’

In 2010, the CAPRISA 004 trial provided the first evidence that tenofovir can prevent sexual transmission of HIV. Tenofovir gel reduced HIV acquisition by 39 percent overall. Two subsequent studies found that tenofovir gel was not effective, most likely because most of the women in the trials did not use the gel consistently. A sub-group analysis of the FACTS001 and the MTN 003 trials showed that the gel was just over 50 percent effective in consistent users, highlighting the importance of high adherence. The new evidence emerging from this genital inflammation study indicates that there may be a biological basis for the differing results as well. The causes of genital inflammation are not well understood at present. Previous studies have shown that there are many possible causes of genital inflammation in women, including imbalances in the bacteria of the vaginal microbiome, sexually transmitted infections and vaginal practices.

Commenting on the study, Dr. Jo-Ann Passmore, head of the CAPRISA mucosal immunology laboratory, a professor at the University of Cape Town, and principal investigator of this research said, "Genital inflammation, which is present in up to a third of women, makes it harder to protect women from HIV infection. The next step is to expand our results to assess how genital inflammation might affect the efficacy in HIV prevention trials of vaccines, passive immunization with antibodies and antiretroviral PrEP administered through pills, rings and implants."

Tenofovir Gel Use With Lower HSV-2 Risk in Women
The risk of acquiring herpes simplex virus type 2 (HSV-2) was reduced by half among women in the ......

Early Phase Clinical Study: Rectal Formulation of Tenofovir Gel Safe and Acceptable
A Phase I clinical study has revealed that a gel formulation of the antiretroviral drug tenofovir .....