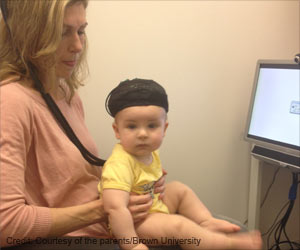 Given the task of learning simple hierarchical rules, babies appeared to use prefrontal cortex (PFC) - region of the brain involved in some of the highest forms of cognition and reasoning, says study published in the Journal of Neuroscience.

The findings suggest that even at the age of 8 months, a baby's PFC appears properly adapted to the kinds of tasks important to an infant of that age, said study senior author Dima Amso, associate professor of cognitive, linguistic and psychological sciences (CLPS) at Brown University.

Are you wondering if your bundle of joy is growing and developing normally? Then take this quiz on baby development milestones. Do note that this quiz is only a guide and not the last word on baby development milestones.
Advertisement
‘Babies' brains are properly adapted for learning essential elements in their world and how best to organize them.’

"The wow factor isn't 'Look the PFC works,'" Amso said. "It's that what seems to be happening is that its function is a really good fit for what these babies need to be mastering at that moment in their development."


An example from bilingualism To make this discovery, Amso, lead author Denise Werchan, fellow CLPS professor Michael Frank and then postdoctoral researcher Anne Collins, who is now assistant professor at the University of California at Berkeley, devised a task initially developed by Collins and Frank to test PFC function in adults. The infant version was made to parallel the circumstance of growing up in a bilingual family. Maybe Mom and her side of the family speak English, while Dad and his family speak Spanish. The babies must learn that different groups of people use different words for the same things.

Baby Brains Respond to Other's Actions, A First Step In Learning By Imitation

For adults, imitation may be the sincerest form of flattery but for babies it's their foremost tool for learning.
Advertisement
To scientists, this association of some people with one language and other people with another is an example of a "hierarchical rule set." The person speaking is the higher-level context that determines what language will be used. Babies must learn that Mom and her brother will say "cat" when Dad and his sister will say "gato" to refer to the same family pet.

The team wanted to determine how baby brains handle this task. They recruited 37 babies to learn a simple, abstracted version of the bilingual scenario while their brain activity and behavior were gently monitored.

On screens before them, babies were shown a face and then an image of a toy. At the same time they'd hear a particular nonsense word in a voice associated with the face, as if the depicted person - call her "person 1" - was calling the depicted toy by that word. Then they'd see a different face with a different associated voice call the same toy by a new word (i.e. as if "person 2" was speaking a different language). Over several rounds, switching back and forth, the babies were exposed to these associations of person 1 with one vocabulary and person 2 with a distinct vocabulary.

After that phase the babies were then introduced to person 3 on the screen who used the same words as person 1, but also introduced a few new ones (in the bilingual family metaphor, think of person 3 as Dad's sister, if person 1 is Dad). If the babies were learning the rules, they'd associate person 3's new words with person 1, because they were otherwise speaking the same rule set or "language."

In the blink of an eye

The researchers tested whether the learning was occurring by next presenting the babies with persons 1 and 2 saying some of the new vocabulary of person 3. Babies who'd been learning should react differently to each instance. They should look longer at the unexpected case of person 2 using a word from the vocabulary of person 3. In fact, that's what the babies did. On average they gazed a couple of seconds longer at that surprising situation of person 2 using an inconsistent language than they did at the expected case of person 1 speaking like person 3.

Meanwhile, the researchers were tracking brain activity by means of a Near Infrared Spectroscopy (NIRS) machine provided, along with technical support, by TechEn, Inc. NIRS safely records brain activity over the scalp and is therefore becoming important to infant research, Amso said. Babies wear a special headband that holds near-infrared sensors over the scalp area of interest. The sensors detect how much infrared light is absorbed by hemoglobin in the blood and therefore report where brain activity is greatest (because that's where the blood goes).

The researchers also tracked the babies' eye blinks because recent research has found that eye blinks reflect the degree of involvement of the neurotransmitter dopamine. When adults learn hierarchical rules, Frank and Collins have combined experimental data with computer models of brain function to suggest, that the key circuit involved is a connection between the PFC and another region called the striatum. That connection is mediated and reinforced by dopamine.

The results of the infrared recording and the eye blink tracking both supported the hypothesis that as the babies were learning they were actively employing the PFC, similarly to adults. Both PFC activity - specifically in the right dorsolateral PFC - and eye blinks were significantly elevated when babies were asked to switch from one "language" to another, which is the most cognitively demanding moment for the PFC during the task.

Moreover, the degree of the babies' elevated PFC and eye blink activity predicted how distinctly they responded to the unexpected situation of a person speaking inconsistently with their language - a measure of how well the babies learned the rule structures.

Developing a new view of development

Amso said the findings suggest that early neurodevelopment should be viewed differently than before. Rather than regarding young brains as immature and less functional, a better perspective may be to regard them as constantly adapting to meet the key challenges they face. When healthy, they are as sophisticated as they need to be.

"Atypical development, then, might reflect an inability to adapt to an environmental challenge, or an earlier adaptation because of a negative environment. Amso said. "We and others are probing with these ideas as relevant to PFC development."

New research has added more evidence that breastfeeding boosts babies' brain growth.
Advertisement
<< The Mystery of Why the Brain is Organized in the Way It is
Coffee Consumption Could Cut Dementia Risk in Women >>