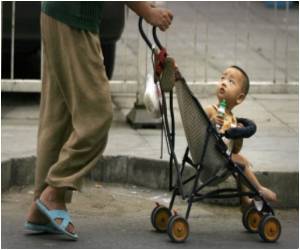 In a new study it has been found that even though babies are too young to talk, they can understand words and process them in a grown up way.

Scientists at the University of California, San Diego, showed that babies process words they hear with the same brain structures as adults, and in the same amount of time.

And they don't just process the words as sounds, they grasp their meanings too.


"Babies are using the same brain mechanisms as adults to access the meaning of words from what is thought to be a mental 'database' of meanings, a database which is continually being updated right into adulthood," said Katherine E. Travis.

Moral Behaviors and Intentions Do Not Escape 3-year-Old Infants!

Two new studies have concluded that young children's helpfulness is tempered when they see that the person they intend to help has harmed another person.
Advertisement
To conduct the study, the team MEG - an imaging process that measures tiny magnetic fields emitted by neurons in the brain - and MRI to noninvasively estimate brain activity in 12 to 18-month old infants.

In the first experiment, the infants listened to words accompanied by sounds with similar acoustic properties, but no meaning, in order to determine if they were capable of distinguishing between the two. In the second phase, the researchers tested whether the babies were capable of understanding the meaning of these words.

Results shown through the scans indicated that the infants were capable of detecting the mismatch between a word and a picture, as shown by the amplitude of brain activity.

The "mismatched," or incongruous, words evoked a characteristic brain response located in the same left frontotemporal areas known to process word meaning in the adult brain.

"Our study shows that the neural machinery used by adults to understand words is already functional when words are first being learned," said Eric Halgren.

"This basic process seems to embody the process whereby words are understood, as well as the context for learning new words."

The researchers say their results have implications for future studies, for example development of diagnostic tests based on brain imaging which could indicate whether a baby has healthy word understanding even before speaking, enabling early screening for language disabilities or autism.

The work is published this week in the Oxford University Press journal Cerebral Cortex.

Eco-bulbs With Mercury Dangerous for Babies and Pregnant

Traditional 'incandescent bulbs' used for more than 120 years are being phased out by th European Union which is persuading people to use low-energy alternatives.
Advertisement
<< MicroRNA-TP53 Circuit Linked to Chronic Lymphocytic Leukemi...
Antipsychotic Drugs Lack Evidence for Effectiveness >>

Pregnant women in Spain are in a tizzy as they try to meet a year-end deadline for a government benefit scheme of 2,500 euro 'cash-for-kids', and have their babies before the clock strikes 12.
Advertisement
News A-Z
A B C D E F G H I J K L M N O P Q R S T U V W X Y Z
What's New on Medindia

Drug Interaction Checker Selfie Addiction Calculator Diaphragmatic Hernia Vent Forte (Theophylline) Blood Pressure Calculator Find a Hospital Color Blindness Calculator Blood - Sugar Chart Sanatogen Find a Doctor
This site uses cookies to deliver our services.By using our site, you acknowledge that you have read and understand our Cookie Policy, Privacy Policy, and our Terms of Use  Ok, Got it. Close
×