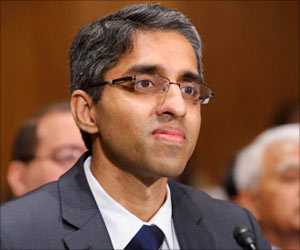 Vivek Hallegere Murthy, 37-year-old Indian-American physician, has been confirmed as the 19th Surgeon General of America by US Senate.

He is the youngest and the first Indian-origin to hold the highly responsible position.

Dr. Murthy's confirmation also marked a major defeat for the powerful gun lobby spearheaded by the National Rifles Association, which had lobbied hard with senators to block a vote, and nearly succeeded, delaying a vote for 10 months.

Democrats pushed the nomination through in the dying days of their leadership of the upper chamber, which passes into Republican hand next month following recent polls.

Welcoming the confirmation, President Barack Obama said he will "hit the ground running" and "build on the progress we've made combating Ebola".

Atul Gawande is an Indian-American surgeon, public health researcher, staff writer The New Yorker magazine and professor at Harvard Medical School and Harvard School of Public Health.
Advertisement
Senator Dick Durbin also praised Murthy for his dedication to fighting obesity, tobacco related diseases and other chronic diseases that are major causes for death in America and make up for 84 per cent of the US's health care costs.

"I believe Dr Murthy understands the significance of the national crises before him. His experiences, his training, and his tenacity have provided him the qualifications he needs to tackle these issues, and the many more he's sure to face, head-on," Durbin said.

"Not only is Dr Murthy an outstanding physician and public health expert, but he also remains closely connected to his community and family," he said.

He was appointed as a Member of the Advisory Group on Prevention, Health Promotion, and Integrative and Public Health in 2011.

Murthy has been the Co-Founder and Chairman of the Board of TrialNetworks, formerly known as Epernicus, since 2007.

He co-founded VISIONS Worldwide in 1995, a non-profit organisation focused on HIV/AIDS education in India and the United States, where he served as president from 1995 to 2000 and Chairman of the Board from 2000 to 2003.

He was born to parents who are originally from South India. He came to the United States when he was three years old and grew up in Miami, Florida.

Indo-Americans have hailed the confirmation of Dr. Murthy, a 37-year-old physician of India descent, to the position of United States Surgeon General.

Zed, who is Chairperson of Indo-American Leadership Confederation, added that, "We applaud Murthy's confirmation, an outstanding physician who has demonstrated to be a sincere and innovative health leader and visionary, committed to improving the health of Americans. We thank US Senate for approval of his nomination."

Health care worker from America, with potential exposure to Ebola, arrived Thursday in the United States for hospital treatment from West Africa
Advertisement
Advertisement
This site uses cookies to deliver our services.By using our site, you acknowledge that you have read and understand our Cookie Policy, Privacy Policy, and our Terms of Use  Ok, Got it. Close
×