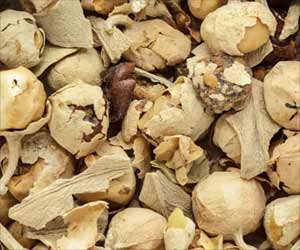 "Natural" therapies must be carefully tested for efficacy, dose-related toxicity and interactions with other drugs. Scientists must find ways to effectively deliver the medicines into the body in controlled ways.

Many plant extracts, like W. coagulans, are bitter and unpalatable at the doses needed to have beneficial effects. Also, when taken orally, the medicinal components in plant extracts are often destroyed by the acidic conditions of the stomach. That's why Say Chye Joachim Loo and colleagues wanted to find a way to encapsulate W. coagulans extract in a delivery system based on natural components that could safely transport the extract to the small intestine, where the cargo would be released and absorbed.


From the berries of W. coagulans, the team extracted plant steroid compounds that increased insulin secretion by mouse pancreatic cells in a dish. The researchers encapsulated the steroids in chitosan nanoparticles made from shellfish exoskeletons and coated the particles with starch, which delayed release of the herbal extract under acidic conditions.
Advertisement
Finally, diabetic mice that were fed the nanoparticles for 5 days showed about 40% lower blood glucose levels compared to their starting amounts. Surprisingly, even 5 days after the treatment ended, the mice showed a 60% reduction in blood glucose compared to their starting levels. This effect could arise from the ability of the delivery system to prolong the release of extract over an extended period of time, the researchers say.

Diabetes Diet Plan
Diet plays a significant role in controlling diabetes. Most cases of diabetes are preventable with ....