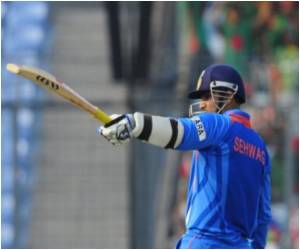 Indian cricket players do take advice from numerologists and astrologists in the hope of success, from Sehwag to Krish Srikkanth. The dashing opener, Virender Sehwag who used to have the number 44 on his back, is now sporting a numberless jersey at the tournament after advice from numerologists. It seems to work with Sehwag in top form at the World Cup where he has 327 runs from five games at an average of 65.40.

Sehwag is not alone in his quirks and superstitions as most of the players in the Indian team are known to consult astrologers and numerologists while adhering to set routines in the hope of success.

A newspaper has reported that India's Eden Gardens stadium in Kolkata is drawing up plans to offer free medical check-ups to fans in a bid to fill the ground during the World Cup.
Advertisement

Captain Mahendra Singh Dhoni sports number seven, since his birth date is July 7, while Yuvraj Singh has a 12 to match his birthday of December 12.


Yuvraj also sports a black thread - believed to ward off evil spirits - on his wrist on advice from his mother.

Promising Indian batsman Virat Kohli has no qualms in admitting he is superstitious.

A birth certificate is no bar at the World Cup 2011. We can see Australians playing for Ireland, South Africans for Netherlands, Indians and Pakistanis in Canadian team.
Advertisement
"Earlier, I used to wear the same pair of gloves with which I'd been scoring," he told the Kolkata Telegraph.

"That phase has gone as now I look for comfort. Now the superstition revolves around wearing black wristbands."

Paceman Zaheer Khan attributes at least some of his success to his lucky charm -- a yellow handkerchief that he keeps with him in every crucial match.

But it was a red one which did the trick for former Australian skipper Steve Waugh, a gift from his grandparents, while India's Mohinder Amarnath, who played in the 1983 World Cup winning team, kept a red handkerchief with him.

Sachin Tendulkar is known to put on his left pad first and is fussy about his favourite bats. He would rather use a battered, taped-up bat than trust a new one.

His family doesn't watch TV when he is batting, fearing that he will get out early if they do.

Even fans try to do their bit to help their teams.

A radio station in New Delhi is running a campaign which urges listeners to do the same thing routinely on each day that India play.

So there are fans drinking milk before the start of a match or sitting on the left side of the sofa all through the game.

"I only eat non-vegetarian stuff while watching India play," said Pritam Sinha who works as a research associate in Delhi.

"Be it fish, chicken or mutton. It brings India good luck and wards off evil forces."

Former India captain and opener Krish Srikkanth recalled how members of the 1983 World Cup winning squad were asked not to move from their positions when Kapil Dev was batting to glory in a key match against Zimbabwe.

"The point was I was standing outside the dressing room on a cold, windy day, with a cup of coffee in my hand. And I didn't move for the next two hours or so! I wanted to go to the toilet, but Man Singh (the manager) said 'no'," recalled Srikkanth of the match at Tunbridge Wells in England.

"To tell you the truth it wasn't easy. Actually, it was tougher than battling it out there in the middle.

"Believe me, it stayed that way till Kapil walked back with a triumphant 175 not out. Not just me but the entire team stood at the same spots.

"It was one of the greatest knocks in any form of cricket, but I would like to think that I had, in my own little way, made a small contribution."

After deciding to pay local beggars to stay off the streets during the World Cup, Bangladesh has launched an all-out war on mosquitoes in and around cricket stadiums to ensure a bite-free
Advertisement
<< Spirit of Standing Together
Trauma Patients Have Better Survival Rates Over the Weekend >>