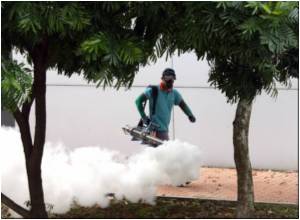 Bangladesh has launched an all-out war on mosquitoes in and around cricket stadiums to ensure a bite-free World Cup for spectators and players.

Authorities have already evicted hawkers and beggars, forced worn-out buses off the roads and banned laundry from being hung out near stadiums to improve Dhaka's image


"Mosquitoes have been breeding alarmingly in recent months so we have taken special measures to kill mosquitoes in the stadiums and for three kilometres around them," The Sydney Morning Herald quoted him, as saying.

Encyclopedia section of medindia gives general information about Dengue and Dengue Hemorrhagic Fever
Advertisement
"Our special teams headed by DCC officers have been spraying extensively in every open space, drain, pond and sewer to make sure no mosquito can breed. We want to ensure a mosquito-free World Cup for spectators," said Brigadier General Nasir Uddin.

Malaria is usually restricted to rural areas of Bangladesh, but dengue fever is common in towns.

The World Cup will be the biggest event that Bangladesh has hosted since gaining independence in 1971.