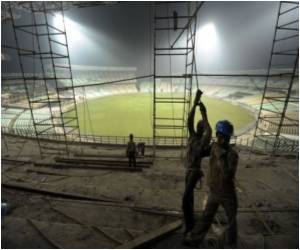 A newspaper has reported that India's Eden Gardens stadium in Kolkata is drawing up plans to offer free medical check-ups to fans in a bid to fill the ground during the World Cup.

Eden Gardens has been left with three games not involving the home nation after the India v England clash on Sunday was moved to Bangalore as the venue was not ready on time.

"We have decided to do something benevolent for the spectators. Our president is in talks with private hospitals and health centres to put the plan into practice," Sujan Mukherjee, joint secretary of the Cricket Association of Bengal, told the Indian Express.


Under the proposal, anyone who buys tickets worth more than 750 rupees ($16.50) will be entitled to a free blood pressure check, echocardiogram and consultation with doctors.

Health insurance guarantees payments to a person in the event of sickness or injury.and works as protection scheme
Advertisement
The 67,000-seater stadium in Kolkata will host South Africa v Ireland on March 15, Ireland v the Netherlands on March 18 and Zimbabwe v Kenya on March 20.

"Everything put together, and with the incentive added, we expect an attendance of over 40,000," Mukherjee said.

Hypertension affects about a billion individuals worldwide and is a silent killer. Medication & lifestyle modification is the cornerstone of an effective antihypertensive treatment.
Advertisement
<< EU Says Red Crescent in Libyan Aid Effort Overstretched
Fans can Vote Online in the New Season of American Idol >>