Increasing the Diversity of Different-Colored Raspberries 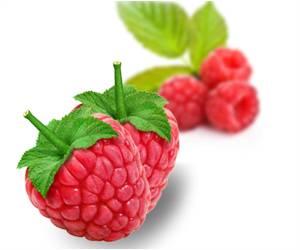 In US, raspberries are the third most popular berry. Their popularity is growing as a specialty crop for the wholesale industry and in smaller, local markets, and U-pick operations.

As consumer interest in the health benefits of colorful foods increases, small growers are capitalizing on novelty fruit and vegetable crops such as different-colored raspberries. Authors of a newly published study say that increasing the diversity of raspberry colors in the market will benefit both consumers and producers. "Producers will need to know how fruit of the other color groups compare with red raspberries with regard to the many postharvest qualities," noted the University of Maryland's Julia Harshman, corresponding author of the study published in HortScience (March 2014).

Eating fresh raspberries could provide a boost to male fertility, increasing the chances of a man fathering a child, a new study reveals.
Advertisement

Raspberries have an extremely short shelf life, which can be worsened by postharvest decay. Postharvest susceptibility to gray mold (Botrytis cinerea) drastically reduces the shelf life of this delicate fruit. "The main goal of our research was to compare the postharvest quality of different-colored raspberries that were harvested from floricanes under direct-market conditions with minimal pesticide inputs," Harshman said. The researchers said that, although there is abundant information in the literature regarding red raspberry production in regard to gray mold, very little research has been conducted on postharvest physiology of black, yellow, or purple raspberries.

Space Tastes Like Raspberries and Smells of Rum: Astronomers

The centre of our of galaxy apparently tastes like raspberries and smells of rum. This statement could prove true if a long term research by astronomers is anything to go by.
Advertisement
"In comparing the four commonly grown colors of raspberry, we drew several important conclusions," they said. "The mechanisms controlling decay and juice leakage are distinct and mediated by both biotic and abiotic factors. The colors that performed well for one area are opposite the ones that did well in the other." For example, firmness was expected to track closely with either leakage or decay resistance; however, the analyses did not indicate this.

Red raspberries, in comparison with the other three colors analyzed during the study, had the highest titratable acids (TA) and the lowest ratio of soluble solids to TA, which, the authors say, accounts for the tart raspberry flavor consumers expect.

Yellow raspberries had the lowest levels of anthocyanins and phenolics. Their TA was lower than red raspberries, but their ratio of soluble solids to TA was the second highest. "This bodes well for consumer acceptance because this measure is an important indicator of flavor," Harshman said. Although yellow raspberries were among the firmest varieties at harvest, they were found to be very susceptible to gray mold, particularly after being harvested on overcast, cool, humid days.

Black raspberries resisted leakage the least of all of the colors, particularly after rainy, humid, overcast days. The authors observed that this quality will make it challenging to move black raspberries into the wholesale fresh market.

Purple raspberries--a hybrid between red and black raspberries--had the third highest anthocyanin and phenolic content, and their flavor was intermediate between black and yellow raspberries. "Similar to black raspberries, their ability to resist juice leakage was poor, and cool weather tended to exacerbate this," the authors said.

"We have shown for the first time that when significant differences between ethylene rates and decay incidence coincide; the berries that produced the highest ethylene rates rotted the most quickly," Harshman said. "Our findings have great impact because they open the door for potential disease mitigation strategies that center around lowering ethylene emission rates on berries to reduce decay."

The authors say that their findings should also be useful to plant breeders, who can use the information to screen raspberry germplasm to look for berries to use as material for generating more decay-resistant fruit.

Black raspberries are highly effective in preventing colorectal tumors in two mouse models of the disease, according to a University of Illinois at Chicago study.
Advertisement
<< Merger Tussle Between Drugs Giants Pfizer, AstraZeneca With...
Treat Homelessness Before Everything Else >>

Find a Hospital Drug Interaction Checker Diaphragmatic Hernia Find a Doctor Iron Intake Calculator Pregnancy Confirmation Calculator Daily Calorie Requirements Post-Nasal Drip Turmeric Powder - Health Benefits, Uses & Side Effects The Essence of Yoga
This site uses cookies to deliver our services. By using our site, you acknowledge that you have read and understand our Cookie Policy, Privacy Policy, and our Terms of Use