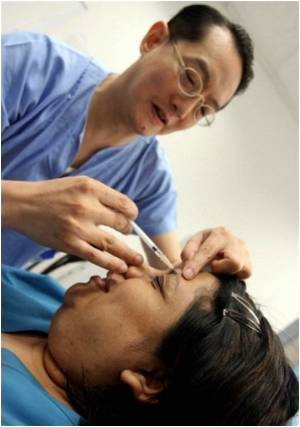 Botox  a toxin known to weaken or paralyze certain nerves and muscles  may have another use that goes beyond just erasing wrinkles.

Johns Hopkins researchers have found that patients with a painful and debilitating nerve compression disorder called thoracic outlet syndrome (TOS), which studies suggest may occur in up to 8 percent of the population, reported a significant reduction in short-term pain after receiving a single, low-dose injection of Botox in a muscle located in the neck.

Though the study, published in the April issue of the journal Pain Medicine, was small, researchers say it suggests Botox is a safe, noninvasive alternative to the syndrome's treatment of last resort: surgery to remove the first rib and sever one of the muscles in the neck.


"There haven't been many alternatives to the use of surgery to treat this syndrome," says Paul J. Christo, M.D., M.B.A., an assistant professor of anesthesiology and critical care medicine at the Johns Hopkins University School of Medicine and the study's lead author. "Botox seems to be an effective treatment that avoids surgery's obvious drawbacks, such as its invasive nature and long recovery time."

Botox or Botulinum toxin A is widely employed in the cosmetic industry due to its anti-ageing properties.
Advertisement
Christo says his latest work significantly improves on previous studies in which TOS sufferers received several Botox injections or injections were made more blindly, without the aid of a CT scan.

TOS is caused by a compression of nerves in the lower neck, which occurs when there is not enough room in the cavity between the base of the neck and the armpit (the thoracic outlet) for nerve impulses to freely pass through. Symptoms often develop in the neck or head and tend to shoot down the arm, causing often excruciating pain, numbness and/or weakness in the limb and extremities. The condition is typically caused by the trauma of a motor vehicle accident, but can also be caused by sitting in the wrong position at a computer for long periods of time, by weightlifting or by an extra rib that is sometimes present in the neck. Treatments include physical therapy, anti-inflammatory medications or surgery.

Christo and his colleagues evaluated 27 patients who were candidates for surgery to treat their TOS and for whom physical therapy and anti-inflammatory medications failed to help. Each was given a 20-unit injection of Botox, a brand-name drug that contains botulinum toxin, made from the same bacterium that causes botulism, a paralyzing and life-threatening form of food poisoning. Christo used a CT scanner to guide the placement of the needle in the patient's anterior scalene muscle in the neck. Each session lasted around one minute, requiring minimal radiation, he says.

Patients experienced a significant decrease in pain in each of the first two months after the injection. At three months, patients still felt a 29 percent decrease in their TOS-related pain as measured on a scientific pain scale.

"This modest amount of pain reduction can have a significant impact on a patient's life," says Christo, a pain medicine specialist. "For many, it allows them to do what they couldn't do before  brush their hair, brush their teeth, hold their child."

Christo says the Botox works to temporarily relieve the pain of TOS in many patients because its paralyzing function decreases the tension and spasms of the muscle, relieving pressure on the nerves as more room is made for them to pass through the thoracic outlet. He says the drug may also decrease pain by reducing the number of neurotransmitters that notify the brain that the body is in pain. Though the study just looked at pain, Christo says some patients appeared to also have increased arm and shoulder function as a result of the Botox injections.

The effects of the drug begin to wear off in a few months, as they do when Botox is injected into facial wrinkles. Christo says patients should be able to receive repeated injections of Botox into the muscle over time, though some could develop antibodies to the compound with excessive use, which would mean the toxin would no longer block pain.

In the study, 48 percent of patients went on to have surgery. Christo says that is because many of those who agreed to participate in the Botox study did so only as a bridge of pain relief before they could get a date in the operating room. Others tried the Botox technique in the hope that they could avoid having surgery, he says. Not all patients are candidates for Botox.

Christo says he would like to do further research into the use of Botox for TOS, following up longer term with patients who are injected with the toxin.

A Jab Of Botox Can Relieve Chronic Pain!

According to a new study Botox is more than just a solution to beat wrinkles. It can even be used as a pain medication to fight Chronic Regional Pain Syndrome (CRPS).
Advertisement
Advertisement

Brachial plexus is a network of nerves that transmits signals from the spine to shoulder, arm and ...