Impact of Pacifiers on Breastfeeding 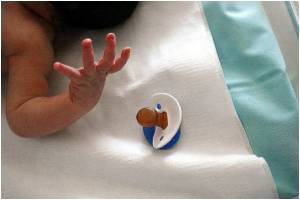 Mothers often use pacifiers to comfort their crying babies, but many experts fear these pacifiers can interfere with breastfeeding. But a recent review finds no link between the pacifiers and successful breastfeeding. The review did not provide information on whether pacifiers might cause breastfeeding difficulties like cracked nipples, or whether they affect infant health or development negatively."We recommend that until further information becomes available mothers who are well motivated to breastfeed be enabled to make a decision on the use of a pacifier based on personal preference," the review authors concluded.

The review looked at data from two randomized controlled trials that involved 1,302 mothers who were highly motivated to breastfeed.

The chief health concerns with pacifiers are that (1) they might undermine milk production by reducing the infant''s time at the breast and (2) pacifier use will promote shallow suckling habits that fail to draw milk efficiently from the breast and lead to cracked nipples and mastitis for the mother.


The World Health Organization recommends against giving pacifiers to breastfeeding infants in the hospital immediately following birth, and a number of studies have found a more general association between pacifier use and early termination of breastfeeding.

Interactive section of Medindia gives simple tips for Breast Feeding
Advertisement
Such studies, however, remain unclear about whether pacifiers cause breastfeeding problems, or if women who are having difficulties with breastfeeding, or whose motivation is waning, are more likely to turn to pacifiers.

The new review appears in the latest issue of The Cochrane Library, a publication of the Cochrane Collaboration, an international organization that evaluates medical research. Systematic reviews draw evidence-based conclusions about medical practice after considering both the content and quality of existing medical trials on a topic.

In the larger study, researchers assigned 1,021 mothers who were already breastfeeding at two weeks randomly into groups whose members either received counseling to offer pacifiers, if needed, to comfort the crying infant, or to avoid pacifiers. In the other study, researchers assigned 281 mothers to similar groups before they had begun to breastfeed.

Pooling data from the two studies, the authors found that permission to use pacifiers made no significant difference in the proportion of babies who were still exclusively or partially breastfeeding at three months and at four months. In fact, the numbers were nearly identical.

The results were the same whether pacifier use was allowed from birth or initiated after breastfeeding had been established.

"Our study helps to reduce the controversy because it strengthens evidence that pacifiers have little effect on breastfeeding in motivated women," said Jacqueline J. Ho, M.D., a review co-author.

But in the absence of data on long-term effects on babies'' health and development, "mothers should not use pacifiers if they have an alternative way to deal with crying and fussing," said Dr. Ho, at the Penang Medical College, in Malaysia.

Lori Feldman-Winter, M.D., a professor of pediatrics at Cooper University Hospital, said that while the review was "well done," its failure to address the short-term impact of pacifier use is an important limitation.

"It''s a timing issue," said Winter, who is a member of the executive committee of the American Academy of Pediatrics section on breastfeeding. "Pacifier use is an event that has most of its effect over the first couple of weeks. And this is where the reviewers say evidence is lacking."

The review answers the question of whether pacifiers make a difference at four months - they don''t - but that might be "because so many other things come into play," she said. "Many women wean their babies during this period for a variety of reasons, most often related to return to work, and these factors overwhelm whatever early effects pacifiers may have."

The paper "highlights the need to do further research, particularly focused on the first two weeks," Winter said. Such research might explore specific outcomes, such as nipple damage, maternal pain and infant weight gain patterns, which could indicate whether pacifiers compromise the baby''s ability to suckle properly.

Winter said that while the American Academy of Pediatrics counsels against pacifiers before breastfeeding is established, the organization recommends their later use, based on several studies suggesting reduced risk of sudden infant death syndrome (SIDS).

Ho said that future research should assess the influence of pacifier use on infant health and development.

She would also like to see pacifier trials extended to six months, the minimum duration of breastfeeding recommended by the World Health Organization, as well as studies that look at the question more broadly. "There is no randomized controlled trial evidence looking at women with lower motivation to breastfeed," Ho said.

The first year after the baby's birth is enjoyable as the baby is learning new things everyday. Take this quiz on the baby's first year after birth and test your knowledge about child-care.
Advertisement
<< Price of Abbott's Epilepsy Drug Revised
Role of Hydro-stomach CT for Detection of Early Gastric Can... >>