Idea of Marriage Does Not Appeal Much to Today's Girls 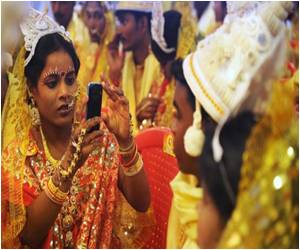 In modern times, girls are increasingly becoming skeptical about the idea of marriage, a new study has found.

Polling for the Girl Guides UK found that less than half of girls see marriage as the 'best' kind of relationship.

The study found that though most of the girls viewed the institution of marriage positively, only 46 percent saw it as the 'best' kind of relationship.


By contrast, the study found that 56 percent of boys saw marriage as the best kind of relationship and continued to find marriage as an aspiration.

Divorce can be traumatic for children and create a sense of insecurity amongst them. Couples should realize that joined parenting is important even after divorce.
Advertisement
According to the Telegraph, meanwhile, seven percent of girls thought it would be better not to get married at all.

Overall, only one in five girls viewed getting married as a mark of success in life, while 56 percent cited being confident and independent.

"Young women today have strong opinions, and some of these are very different from the boys," Gill Slocombe, the Chief Guide, said.

"Girls still value family and marriage, but they clearly do not see this as the absolute definition of success," Slocombe added.

"They value confidence, so it is a great shame that despite this they feel they are judged on their looks and believe that society wouldn't value them if they focus on motherhood or work in a caring profession," Slocombe added.

Infidelity is no longer seen as a midlife crisis alone because younger people are beginning to cheat on their spouses
Advertisement
<< Five Simple Ways To Prevent Breast Cancer
By 2017, China Will be the 2nd Biggest Luxury Market >>

Is Life Better Staying Single or Getting Married?
News Archive
News Resource
Advertisement
News Category
Beauty Regime for All Skin Types Tale of Love Hormones Shaping our Responses to Society How to Reduce Needle Anxiety in Children? Tobacco Addiction: Here's How to Break the Habit Parents are 'Winging It' on Their Kids' Mobile Use
More News
Sign up for Wellness Consult a Doctor Sign up for Selfcare