By 2017, China Will be the 2nd Biggest Luxury Market 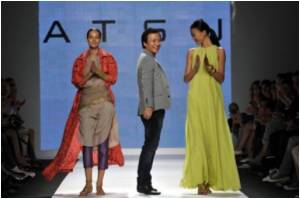 An industry report has revealed that China is set to become the world's second biggest market for luxury goods after the United States in five years.

Anupamaa Dayal has said that women need to make sure that they are healthy, instead of running after fashion trends.
Advertisement

Luxury-goods sales could top $302 billion worldwide this year, up 4.0 percent from 2011, as buyers from developing nations snap up designer handbags, clothes, jewellery, watches, fine wine, champagne and spirits, it said.


"Benefitting from a fast-growing middle class and a fast-developing luxury distribution network, sales of luxury goods in China have consistently outperformed the global market," Euromonitor said.

A study on European youths and fashion revealed on Wednesday that youths are ready to spend big on their looks and share a passion for clothes .
Advertisement
Japan is currently the world's second biggest market for luxury goods but its share has been shrinking as the country struggles with economic problems.

Demand for luxury goods has been lacklustre this year in developed Western markets and Japan due to rising prices and mounting insecurity over jobs and pensions, Euromonitor said.

However, emerging markets led by the so-called BRIC grouping -- Brazil, Russia, India and China -- are making up for the shortfall.

The BRIC countries will account for 11 percent of total luxury sales with a combined retail value of over $33 billion this year, up from only 4.0 percent in 2007, it said.

The world's four biggest luxury goods markets -- the United States, Japan, Italy and France -- still accounted for almost half the value in sales this year, the report said.

Designer apparel are expected to remain the best-selling items, accounting for 42 percent of total luxury goods revenue by 2017, but jewellery and timepieces are fast gaining popularity, it said.

While China's importance to luxury goods makers has soared in recent years, signs have emerged of demand growth easing.

Fashion federations from around the world were helping young designers in Paris this week to avoid a nightmare scenario where you've got the clothes, the models and the venue and no one turns up.
Advertisement
<< Idea of Marriage Does Not Appeal Much to Today's Girls
Abortion for Rape Victim Blocked by Argentine Court >>

By 2017, China Will be the 2nd Biggest Luxury Market Personalised Printable Document (PDF)