How a Small Problem During Cell Replication Process Could Result in Cancer? 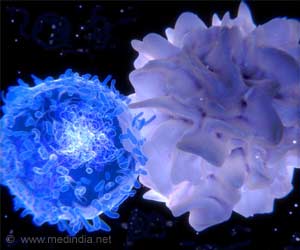 Cell replication process can destabilize if the cell has more than or less than one pair chromosome, finds a new study. This destabilization can led to cancer development. The findings of this study are published in the Journal of Cell Biology.

In mammals, including humans, cells which make up the body are diploids, which means that a cell contains a pair of each chromosome. A non-diploid state destabilizes the properties of the cells, triggering abnormalities, cancers and other serious diseases.

Advertisement
‘Chromosome instability in cancer cells which are often in a non-diploid state can be made use of to develop new cancer treatment strategies.’

In asexual reproduction and cancer development, haploid (one set of each chromosome) and tetraploid (four sets of each chromosome) cells are generated, causing chromosomes to become unstable. However, why this instability occurs when the cell is in a non-diploid state has remained unknown.

In addition, researchers found that there were fewer cellular fibers, called microtubules, in haploid cells, and more in tetraploid cells. This was significant, as the number of these fibers was found to be a key factor that changes the efficiency of centrosome duplication, resulting in either centrosome loss or over-duplication. On the other hand, the efficiency of DNA replication, which is another important step in cell replication, remained constant, regardless of a cell's ploidy.

"Incompatibility between centrosome duplication and the DNA replication cycle could be the underlying cause of the instability in non-diploid cells in mammals," says Ryota Uehara. "Our findings could help understand chromosome instability in cancer cells, which are often in a non-diploid state, and lead to new cancer treatment strategies."

Beta Cell Replication can be Promoted by Targeting a Cell Cycle Inhibitor
The loss of beta cell mass, which results in decreased insulin production, is one of the factors ......

Sperm Cells of Fruitfly Unveil Complex Coordination in Stem Cell Replication
Stem cell division is regulated at the final stage of replication called cytokinesis, which is ......

Method With Which Protein Component That Enables Cell Replication Gets Ferried to Chromosome Tips Shown By New Research
Don't you think that stem cells are special?...