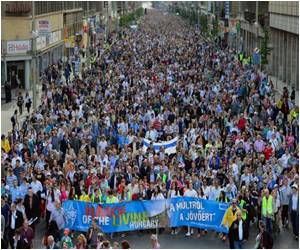 A record number of 25,000 people took part in Hungary's annual "March of Life" commemorating the Holocaust on Sunday, as part of events marking 70 years since the start of mass deporations of Hungarian Jews in World War II.

There was an open-air concert in front of the House of Terror museum in Budapest before a procession from the Elizabeth Bridge -- where a new sculpture was unveiled -- to the Keleti railway station.

A train then left for Auschwitz carrying 600 people, one for every 1,000 Hungarian Shoah victims, ahead of a ceremony Monday at the former Nazi death camp in Poland to be attended by Hungarian President Janos Ader.


"Today is important because it is important for Hungarian society, and the international community, to remember what happened 70 years ago," Israel's ambassador to Hungary Ilan Mor, who unveiled the sculpture together with a Holocaust survivor, told AFP.
Advertisement
Around 600,000 Hungarian Jews perished in the Holocaust after Nazi Germany's invasion of Hungary on March 19, 1944, either worked to death in labour camps or gassed. Only around 100,000 survived, mostly in Budapest.

A programme of events organised by the government to mark the 70th anniversary has been boycotted by Hungary's largest Jewish organisation, Mazsihisz.

It complains that Orban, re-elected earlier this month, has presided over a rise in anti-Semitism in the EU member state and is seeking to rewrite history.

It is angered in particular by a planned Budapest monument due to be unveiled on May 31 dedicated to "all the victims of the Nazi occupation of Hungary" that Mazsihisz says minimises the role Hungarians themselves played in the Holocaust.

The far-right Jobbik party, one of whose MPs sparked outrage in 2012 by calling in parliament for a list of Jews posing a "national security risk", saw its share of the vote rise to 20.5 percent in the April 6 election.

Hungary Postpones Inauguration of Disputed Holocaust Monument
The Hungarian government has postponed the inauguration of a controversial monument that, according ...

Holocaust Memorial Year to be Boycotted by Hungary Jews
Mazsihisz, Hungary's largest Jewish organisation decided on Sunday that it was pulling out of a ......