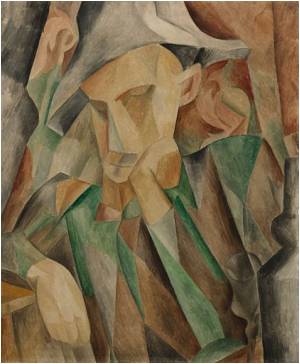 Anti-war masterpiece "Guernica", one of the world's most iconic paintings by Pablo Picasso, served as a backdrop to a dance performance for the first time in its 77-year history, on Sunday.

About 80 people sat on the floor or stood as Josue Ullate, a bare chested dancer in black tights, jumped and leapt in front of the large black-and-white canvas at Madrid's Reina Sofia Museum.


It took organisers over a year of talks to get permission of Ullate to perform in front of the painting, which used images of distorted figures -- human and animal -- to represent the horrors of war.
Advertisement
The Reina Sofia Museum initially turned down the request but it eventually relented after Picasso's family gave their support to the project, daily newspaper El Pais reported.

"I think it is an amazing idea, very good. They should do it all the time. This was special, it is 'Guernica'. Marvelous," said Miguel Angel Colilla, a 44-year-old painter, after one of the performances.

Ullate performed the piece -- created by his father Victor Ullate, a renowned Spanish ballet dancer and choreographer -- on a specially created sprung dance floor installed in the gallery where the painting hangs.

Tickets to the one-time event which was held after the museum closed to the public were distributed for free on a first come first served basis over the Internet.

"It was stupendous. Aesthetically the setting is perfect," said Bartolome Garrido, a 44-year-old lawyer who attended with his wife and their two young children.

Picasso created "Guernica" as a commission for Spain's Republican government to represent the country at the 1937 World Fair in Paris, as Spain writhed in a bloody civil war started by future dictator General Francisco Franco.

The painting was transferred to Madrid in 1981 from New York's Museum of Modern Art, where it had been deposited on a long-term loan by Picasso until democracy was restored in Spain.

For fear of attack, it was initially housed behind bullet-proof glass and under armed guard at the Prado Museum in Madrid before it was eventually transferred to the nearby Reina Sofia Museum when it opened in 1992.

The painting took its name from Guernica, the ancestral capital of northern Spain's Basque country, which was bombed on April 26, 1937, a spring market day, by German and Italian air forces supporting Franco in a civil war that set the stage for World War II.

More News on:
How to Zumba Dance Your Way to Good Health

Picasso Museum in Paris to Reopen After a Five-year Gap
Paris's Picasso museum houses, one of the world's most extensive collections of the Spanish ......