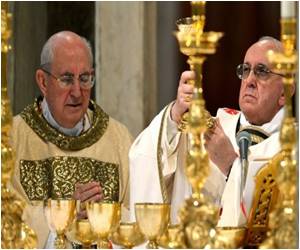 The Polish pope's sainthood was celebrated by tens of thousands of pilgrims who flocked to John Paul's adopted town of Krakow on Sunday, as the people's belief of his sainthood was made official.

"It's the culmination of a religious process, but for us he's always been a saint," 56-year-old civil servant Janina Powiazka told AFP in the southern Polish town where Karol Wojtyla spent his pre-papal years.

John Paul II and John XXIII have been declared the Catholic Church's newest saints at a festive ceremony by Pope Francis on Sunday, amidst hundreds of thousands of pilgrims.
Advertisement

"It's a huge day for us. The capstone of his life and of his life's work, which he shared with us," added the resident of the nearby mountain town of Zakopane, where the nature-loving pope often hiked.


Powiazka was among around 30,000 pilgrims from both Poland and around the world who gathered outside Krakow's Divine Mercy Sanctuary, where a huge screen beamed live images from the Vatican's historic canonisation ceremony.

The reason late pope John Paul II will be declared a saint on Sunday, is a woman from Costa Rica who was healed by him, who gladly agreed to travel the world with a message of hope.
Advertisement
It is here that a young John Paul II came to pray during the Nazi occupation of Poland during World War II, while he was working at a nearby stone quarry.

The sanctuary on the hill was also home to Sister Mary Faustina Kowalska of the Blessed Sacrament, who was declared a saint in 2000 under the Polish pope's watch.

On Sunday, the crowd here erupted in a thunder of applause after current Pope Francis declared in a Latin prayer that fellow pontiffs John Paul II (1978-2005) and John XXIII (1958-1963) were now saints.

"It's an extraordinary day," said Barbara Sobola, 35, from the southern town of Jaroslaw.

"The pope was an example for us to follow. He taught us compassion for others, tolerance, kindness. He showed us how to endure suffering."

"It's all the more moving because up to now a saint was this distant person who lived centuries ago. But today we have someone who was close to us and whom everyone here knows."

For 70-year-old Wieslawa Jezyna, who journeyed from the western city of Poznan with 50 others, the ceremony brought back memories of John Paul II's death in 2005.

"I remember that moment at his funeral, when there was an open bible on his coffin and suddenly the wind forced it shut," she told AFP.

"At that moment, something also came to an end in our lives. But today is a time of joy. To have a Polish pope who then becomes a saint, that won't ever happen again in our lifetime."

As well as Poles, hundreds of pilgrims from across the world also flew over to Krakow to pay tribute to John Paul II.

"The Polish pope was always present in my life," said Maria Badalla, a Mexican-born American who made the trek over with a group of faithful from her parish in the city of Mount Vernon.

"He was blessed, kind, humble. I came to Poland because it all began here, this is where he lived. I wanted to find out more about who he really was," she told AFP.

Papal Inspiration for Showbiz With the Sing-Along Saint

Diaphragmatic Hernia Blood Donation - Recipients Drug Side Effects Calculator Drug Interaction Checker Accident and Trauma Care The Essence of Yoga Blood - Sugar Chart Daily Calorie Requirements Loram (2 mg) (Lorazepam) Calculate Ideal Weight for Infants
This site uses cookies to deliver our services. By using our site, you acknowledge that you have read and understand our Cookie Policy, Privacy Policy, and our Terms of Use