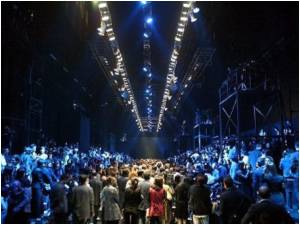 Sited in a high-tech venue in a 29-storey Tokyo office building, the curtain is about to go up at a new theatre dedicated to Japan's centuries-old kabuki-za performing art.

The theatre in the upscale Ginza shopping district, which will open to the public at the start of next month, will let audiences use portable monitors to read subtitles to explain the sometimes difficult to understand art form.

The service will be available only in Japanese at first. But theatre managers hope to include foreign language services, starting with English, over the coming months, a spokesman told visiting journalists Monday.


Another feature is the pit below the stage, which is now 16.45 metre (54 feet) deep -- nearly four times what it was. The pit allows for props, actors and scenery to emerge from the bowels of the building.
Advertisement
Despite the high-tech fixes, the theatre retains many elements of the original interior as well as the facade, which evokes medieval Japanese castles and temples with its curved roofs and red paper lanterns.

The new four-storey playhouse, with an 1,800-seat capacity, is the fifth version of the theatre, whose history dates back to 1889.

The previous building, erected in 1951 to replace one heavily damaged in World War II, was demolished in 2010 due to worries over its ability to withstand earthquakes.

The theatre is now housed in a 143-metre (470 feet) skyscraper, the tallest building in the area.

Ninjas Gather in Japan to Train Women in Self Defence
More than 200 ninjas gathered at the Tokyo gymnasium to fuel the two-day training seminar, designed ...