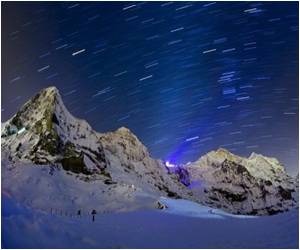 Despite recurring heart troubles, a thrill-seeking Japanese octogenarian said that his third assault on Mount Everest will be the "ultimate anti-ageing" remedy.

Yuichiro Miura is readying to begin his third ascent of the 8,848-metre- (29,028-foot) peak and recapture a record he previously held for being the oldest person to scale the world's highest mountain.

The 80-year-old heads to Kathmandu next week and is scheduled to begin his climb in May, aiming to repeat a feat he first achieved in 2003 at the sprightly age of 70.


"When I was 75, I did it again and realised nothing is impossible," the adventurer said in Tokyo.

"Making another attempt at 80 will boost my courage, willpower and motivation, bringing the ultimate anti-ageing effect as a result."
Advertisement
His 2003 record was broken in 2007 when fellow Japanese Katsusuke Yanagisawa scaled the summit when he was 71.

Miura conquered Everest for the second time in May 2008, just one day after Min Bahadur Sherchan made it to the top at the age of 76. The Nepalese is the current world record holder, according to Guinness World Records.

"I don't care much about the world record," said Miura, who suffers from heart arrhythmia. "The record is there for someone else to beat."

Miura made world headlines in 1970 when he became the first person to ski down Everest -- from an 8,000-metre point on the South Col route.

His parachute-aided descent was documented in the 1975 film "The Man Who Skied Down Everest" which won the Academy Award for Best Documentary.

High-octane endeavours are in his blood -- his own father Keizo skied down Mont Blanc at age 99. The senior Miura died seven years ago aged 101.

Getting to the roof of the world was an idea that occurred to the younger Miura at an age when many people are starting to slow down.

"I started thinking about climbing Everest when I was 65. It was a kind of goal toward which I can dedicate myself," he said.

He underwent surgery to correct recurring arrhythmia last November and again in January this year, as he did before the 2008 expedition. He was undeterred by a skiing accident in 2009 that left him with a broken pelvis and fractured thigh.

"My muscle power has improved since I was 70," he insisted. "My willpower threatened to go down when I was in my early 60s but I have managed to hold myself up."

Miura is not the only member of Japan's greying society to defy the age barrier in sports and adventure.

At last year's London Olympics equestrianism competitor Hiroshi Hoketsu was the oldest participant in any sport, at 71, and said he had no immediate thoughts of retirement.

The world's oldest living person is Jiroemon Kimura, a 115-year-old man in Kyoto.

Ninjas Gather in Japan to Train Women in Self Defence
More than 200 ninjas gathered at the Tokyo gymnasium to fuel the two-day training seminar, designed ...

Japan Came Up With Smart Walking Stick That Stops You from Getting Lost
A cane that has a built-in display that can show arrows to direct the user towards their ......