Ninjas Gather in Japan to Train Women in Self Defence 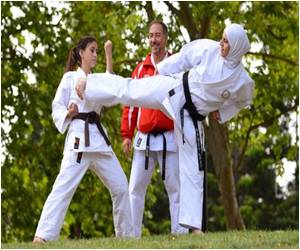 More than 200 ninjas gathered at the Tokyo gymnasium to fuel the two-day training seminar, designed particularly for women.

The disciples of Grandmaster Masaaki Hatsumi, the founder of the Bujinkan school, gathered from more than 17 countries at the Tokyo Budo-kan martial arts gymnasium to sharpen their self-defence skills.

Gone are the days when the Japanese historical masked agents carried out espionage acts against opposing warlords, they said.


Mondern-day ninjas are ordinary people with normal jobs who practise self-defence skills, or "ninjutsu", stressing use of balance and space to bring opponents to submission.
Advertisement
The historical image of a ninja may attract many people, but they soon find the importance of the culture and philosophy behind it, said Sheila Haddad, an American instructor who helped organise the event.

"It's appealing to women because it does not rely on power and strength," she said, adding that many disciples are involved in law enforcement or the military in their countries.

Ninjutsu techniques as well as the ninja philosophy can be applied to real combat settings, said Doreen Montesclaros, 25, a soldier in the New Zealand army.

But ninja ways are more relaxed, she said.

"Being surrounded by male colleagues, I find that it adds new dimensions to the way I approach battle scenarios. I come into it with an overall picture, as opposed to being stuck in the moment and relying on aggression," she said.

"It helps me realise the greatest weapon that I have. That's my mind and being able to see all the factors that make up situations."

Jinichi Kawakami, the 21st head of the Ban clan, a different line of ninjas that can trace its history back some 500 years, is considered by some to be the last living ninja and has said that "ninjas proper" no longer exist.

Asia Reigns in Mixed Martial Arts
It has taken time and a few false starts but Asia, the spiritual and physical home of martial arts, ...

Martial Arts Training is Good for Senior Citizens
Scientists have outlined the importance of training older people in martial arts as it can reduce ...

Kenya's Korogocho Slum Grandmas Learn Martial Arts for Survival
At the age of 60, 80 or maybe 100, the karateka grandmas of Korogocho slum are learning the basics ....