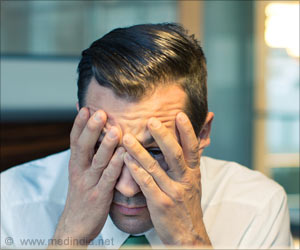 A research team from the University of Washington in Seattle have studied that soldiers with hypertension were found to show better results from prazosin treatment to combat Post traumatic stress disorder(PTSD).

High blood pressure could be an effective biomarker to predict individual response to drug treatment for Post traumatic Stress Disorder. The research study was published in Biological Psychiatry.

"These findings suggest that higher standing blood pressure is a biomarker that can contribute to a personalized medicine approach to identifying soldiers and veterans with combat PTSD likely to benefit from prazosin," said Murray Raskind of the VA Puget Sound Health Care System and the University of Washington in Seattle, who led the study.


A biomarker such as blood pressure would have exceptional clinical utility because it would provide an easily measurable and immediate predictor of treatment response that could help doctors determine the role of prazosin or a similar medication in the treatment strategy for an individual.

Hypertension in Elderly Linked to Down-Regulation of microRNA-155

Age-related reductions of a microRNA (miR-155) may underlie age-associated hypertension. Restoration of miR-155 in aged mice improved blood pressure parameters.
Advertisement
Prazosin blocks α1-adrenergic receptors (α1AR), and through this mechanism prevents some of the effects of adrenaline and noradrenaline, chemicals released by the body during stress. "It would make sense if prazosin was most effective in those patients with the greatest activation of noradrenaline systems," said John Krystal, Editor of Biological Psychiatry.

However, activity of α1AR cannot be measured directly in humans. So the researchers identified a peripheral biological marker that is regulated by α1AR activity; noradrenaline stimulation of α1AR increases blood pressure, suggesting that blood pressure may be a useful indicator of α1AR activity.

The researchers analyzed the combat PTSD symptoms and blood pressure measures collected previously as part of a randomized controlled trial of 67 soldiers who had returned from Iraq and Afghanistan. Thirty-two participants had received prazosin, and 35 had received placebo for 15 weeks.

"Pretreatment standing systolic blood pressure strongly predicted response to prazosin," said Raskind. By the end of the 15 week treatment period, participants with a higher initial blood pressure saw a bigger improvement in their PTSD symptoms, with a better outcome for every 10 mmHg increment above 110 mmHg.

In addition to suggesting that blood pressure may help predict which soldiers with PTSD will benefit the most from treatment, the findings also provide insight into the pathophysiology of the disorder.

"The increase in blood pressure in these PTSD patients may be a biomarker for patients who are more likely to benefit from prazosin," said Krystal. "If so, it may be a useful indicator of activation of noradrenergic activation associated with PTSD in these patients."