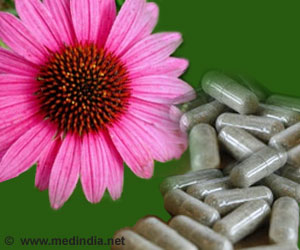 Echinacea can prevent colds, finds a recent study. Their study suggested that taking Echinaforce, a common form of the herb extract, could not only reduce the risk of colds but also reduce the amount of paracetamol patients took while ill.

Echinacea is extracted from the Eastern Purple Coneflower, which is found in North America, and has long been used as a herbal remedy for the common cold.

Tests on 750 patients found that taking three daily doses of the common remedy for four months reduced the number of colds and duration of the illness by an average of 26 per cent, the Telegraph reported.


The treatment also cut the number of recurrent colds suffered by people with weak immune systems or a history of catching several bouts each year by 60 per cent, experts from the Cardiff University Common Cold Centre found.

A person afflicted with the common cold is most infectious three days after the start of infection. Find out more about the malady and about some simple home remedies to counter the problem from this quiz on cold.
Advertisement
It was primarily designed to test the safety of the treatment, and found that it caused no adverse side effects in the participants, who were all over the age of 18.

The MHRA, the British drugs regulator, warned parents earlier this year that Echinacea should not be given to children under 12 because of the risk of "severe" allergic reactions including rashes and swelling of the mouth and tongue.

The medicine is believed to work by fighting viruses, which cause up to 95 per cent of all colds and flu, and studies suggest it can also boost weak immune systems if swallowed.

Patients mixed 25 drops of Echinaforce or a placebo with water and held it in their mouths for 10 seconds before swallowing it, three times per day over a four-month period.

Those who took the treatment suffered 149 bouts of illness compared with 188 in the placebo group, a difference described by researchers as "borderline significant", but the total number of days spent with flu was reduced from 850 to 672, a "highly significant" change.

Recurring infections were cut from 100 episodes in 43 patients to 65 episodes in 28 patients, a difference of 59 per cent, the researchers wrote.

"We were actually pretty amazed when we found this 26 per cent difference in cold episodes," the paper quoted Roland Schoop, a medical researcher for Bioforce, the British arm of A. Vogel, and one of the study's authors, as saying.

The research, which was part-funded by A. Vogel, the Swiss manufacturers of Echinaforce, was published in the peer-reviewed journal Evidence-Based Complementary and Alternative Medicine.

Echinacea - No Remedy for Common Cold

Echinacea, the herbal treatment that many relied upon as a remedy for colds, has been found to have very little effect on the symptoms or on curing the illness.
Advertisement
<< Vitamin C Prevents Bone Loss in Animal Models
Scientists Discover Genetic Defect Behind Rare Disorders >>